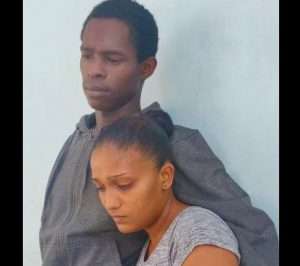 trinidadexpress.com- A nine month old baby boy suffering from a cough and cold was found dead in his bed at his Ste Madeleine home on Tuesday morning.

Baby Jarion Cooper was fed a bottle of milk and cold medicine, then fell asleep on a bed next to his mother Shantal Mohammed in their home at Stanleyville.

Mohammed said that when she awoke around 6 a.m. the child was lying on his back and was unresponsive.

Paramedics were unable to revive the child and he was pronounced dead at the scene by a district medical officer.

Mohammed and Jarion’s father spoke with the Express outside the San Fernando mortuary on Wednesday morning.

The mother said that since last week the child showed symptoms of the cough and cold and she took him to the district health facility where he was prescribed over the counter medication.

The couple also has a 20 month old baby girl, Jamika.

Cooper said the child had a “rattle” on his chest when he breathed.

“Last Thursday we took him to Ste Madeleine Clinic. He got two injections. They advised me to use baby Panadol and Vicks and that is what we did”, she said.

She said that on Monday, she, Cooper and baby Jarion went to Carat Shed beach at La Brea.

“On his last day he was very playful and laughing. He looked comfortable. He did not have fever just the cough and cold. We went to Carat shed beach in La Brea, but he did not bathe in the beach. He stayed in the car seat. When we came home I bathed him, gave him Panadol and a bottle of tea. He went to sleep around 9.30 p.m. Monday”, Mohammed said.

She said the child awoke around 2 a.m. Tuesday, drank a bottle and went back to sleep.

“Normally he would get up around 6 am and wake me up, but that that morning he didn’t wake me up. He looked like he was sleeping. I thought that the baby Panadol had him drowsy and he was sleeping more. I made his tea and came back into the bedroom. When I came back his body was already cold”, the mother said.

Paramedics of the Emergency Medical Services responded but were unable to revive the child.

Cpl Langley and other officers of the Ste Madeleine Police Station also responded.

The parents were told that the child would be taken to the Forensic Sciences Centre for the autopsy to be done.