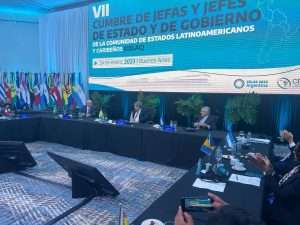 (CMC) – St Vincent and the Grenadines has been elected to the presidency of the Community of Latin American and Caribbean States (CELAC), which ended its seventh summit here on Tuesday.

Prime Minister Dr Ralph Gonsalves, addressing the 33-member hemispheric grouping, called for a fresh guard in these difficult times to reflect on the purpose of the integration movement.

“We are forming a meaningful link between Latin America and Caribbean civilizations,” Gonsalves said, as Kingstown was elected unanimously to the helm of the body that welcomed back Brazil’s  President Luiz Inácio Lula da Silva, whose country re-joined CELAC after a two-year absence.

Brasilia withdrew from the bloc during the presidency of Jair Bolsonaro, who was recently voted out of office, after serving from 2019 to 2022.

CELAC was founded in 2011 to avert United States influence in the hemisphere and excludes Canada and the United States. However, Washington will be represented at this year’s meeting, with US Special Presidential Advisor for the Americas, Chris Dodd in attendance.

Several Caribbean countries are also being represented at the summit by their foreign ministers.

Gonsalves said the CELAC presidency would put Kingstown “in a critical leadership position to help to define the dialogue which will take place between CELAC, consisting of 600 million people in 33 states, define the relationship between CELAC and the European Union over the next two to three years”.

He said that this year, CELAC will hold summits with the European Union, the African Union, India and China.

Meanwhile, CELAC in a communique has called for more international funding in the region following economic and climate crises.

“We stressed the need for international regional financial institutions, such as the Multilateral Development Banks, to improve credit facilities through clean, fair, transparent and accessible mechanisms.”

The 111-point “Declaration of Buenos Aires” described how effects of COVID-19, climate change and the war in Ukraine had rippled across the region, stating “we express our concern that several countries emerged from the pandemic with higher levels of public debt”.

The statement also stressed the importance of democracy across the region, expressed support for negotiations between the Venezuelan government and its opposition, and demanded the United States lift its blockade on Cuba.