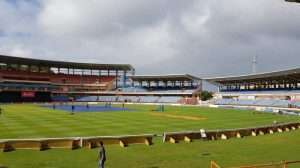 PR – The Grenada Cricket Association (GCA) today announced that there will be no admission charge for the West Indies Championship Matches at the Grenada National from January 31 to February 11, 2023.

Dwain Gill, President of the GCA said: “With the matches being played during the week, we want to encourage those not at work to attend and also school groups.  It is a wonderful opportunity to support some of our home grown players and others in the sub region who are based in Grenada with the Windwards Volcanoes.  We expect Trinidadians and Guyanese residing in Grenada to support their teams as well.”

Matches begin at 10:00 am daily and end at 5:00 pm with spectators being accommodated in the Junior Murray / Rawl Lewis Stand.

The West Indies Championship is the four-day regional red ball format for the region featuring the six West Indies Territorial franchise teams.  Six teams will play each other in a League format, consisting of 5 rounds played from January 31 until April 2023.