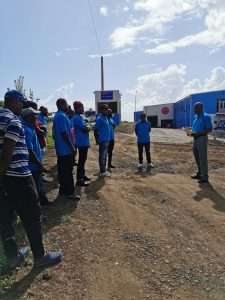 PR – The Bank and General Workers Union, bargaining agent for four (4) units of Cane Co. workers is condemning the actions of the Management of Cane Co. by preventing twenty-seven (27) workers who is employed as full-time sugar cane harvesters from resuming their duties on January 3rd, 2023.

The Harvesters informed the Union on the morning of January 3rd ,2023 that they returned to work on that same day in keeping with their work schedule and as instructed by their supervisor after their holiday break from 23rd December, 2022.

A meeting was held on January 4th, 2023 between the Management of Cane Co. and the Union in an attempt to resolve the matter. The Union put forward that these workers are full time employees of the Company and that the Company ought not to unilaterally change the existing working terms and conditions of the employees. Further, the Union expressed its disappointment of the failure of the Management of Cane Co. to engage the Union on this matter.

A recommendation was put forward to the Company by the Union in keeping with the past practices when there was no sugar cane to harvest in an attempt to find a resolution to the problem.

Management Stated that they need to discuss this matter with their board members who are based in the United Kingdom.

At a subsequent meeting on January 13th, 2023 the company rejected the Union’s position and handed the Union a letter which stated that the company’s new position is to sever all the full-time harvesters and rehire them as Seasonal Workers effective |anuary 1st ,2023.

The Union rejected their proposal.

Another meeting was held today |anuary 20th, 2023 which ended with no resolution in sight.

The Bank and General Workers Unisn is extremely  disappointed with the position of the managementof CaneCo. Their decision is resulting in tremendous hardship on the lives of the workers and their families. Many of these workers have outstanding financial commitments and as such we are calling on Management to do the right thing and allow these workers to return to work immediately.