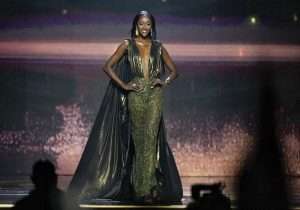 (TRINIDAD EXPRESS) – AFTER 17 years of not placing in the Miss Universe Pageant, Trinidad and Tobago’s Tya-Jané Ramey was able to break that drought and place in the top 16 at the 71st pageant, held at the Morial Convention Center in New Orleans, Louisiana, in the United States.

However, R’Bonney Gabriel, a fashion designer, model and sewing instructor from Texas, who competition officials said is the first Filipino American to win Miss USA, was crowned Miss Universe on Saturday night.

The Associated Press article said Gabriel closed her eyes and clasped hands with runner-up Miss Venezuela, Amanda Dudamel, at the moment of the dramatic reveal of the winner, then beamed after her name was announced.

Thumping music rang out, and she was handed a bouquet, draped in the winner’s sash, and crowned with a tiara onstage.

But for local viewers, the night belonged to Miss Trinidad and Tobago who ended in the top 16 in a competition of 84 delegates.

Many Trinbagonians and Caribbean people on social media were rooting for Ramey, especially her display of the Saga Boy and Pierrot Grenade traditional costume, during the national costume segment.

Ramey’s portrayal even made People magazine’s top 15 list of must-see costumes from the competition. She was ranked number eight.

Speaking to the Express yesterday from New Orleans, national franchise director of Miss Universe T&T, Steven Jones, said he was humbled that Ramey had ended the 17-year drought of not placing.

“We’ve returned after five years of having no representation and have been well received. Coming into a new era of Miss Universe with its focus on transformational leadership was right up our alley since that is at the core of the Crowns and Sashes Academy. Tya Jané Ramey did what had to be done and we are grateful to her for a stellar performance,” Jones remarked.

Asked what the emotion was like when Miss Trinidad and Tobago did not place among the finalists, he said as a small country some areas have to be worked harder at, and seeing the body of work from other representatives, it could have gone either way.

“Of course, you want your girl and country’s name to be called—one step closer to the crown, but we are satisfied with our performance this year,” Jones exclaimed.

However, the franchise director identified that Ramey would have excelled in interviews, prelims (swimsuit and evening gown), and the national costume to secure her a top placement.

Describing how the team felt after seeing all the positive responses about her costume on social media, Jones said they took a major gamble because one never knows how the locals would respond to a traditionally inspired costume on stage.

“But the overwhelmingly positive reception of the Saga Boy and Pierrot Grenade-inspired costume was surprising! People from all around the globe are talking still about it! It’s different and memorable! It’s what we are known for storytelling and drama,” he outlined.

Ramey is expected to return tomorrow at 3 p.m. and the franchise holder has asked members of the public to “come out and support” Miss T&T.