According to police sources On Thursday 12th January 2023, as a result of information received from Customs and Excise, officers attached to the Customs Enforcement, Drug Squad, and Criminal Investigation Department, conducted a search 4 pallets containing goods at the St George’s Port, which was imported by Barry Gary Nicholas. During the search of the pallets, the following was found in one of the pallets among the items. 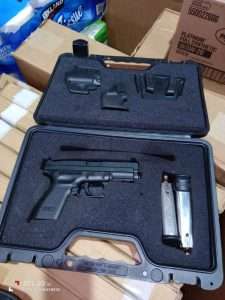 His next appearance will be at the St George’s Magistrates Court, on Tuesday 21st February, 2023.

Two Weeks ago, Barry Gary Nicholas, who is a retired US soldier, was arrested and charged for possession and importation of firearms and ammunition.

Nicholas, a resident of Dr. Grooms, St. Georges was arrested following a search of a container at the nation’s port on December 30, 2022.

According to Assistant superintendent Simon Douglas, police were notified of a situation involving a 40ft container on the port.

He said a subsequent search by customs along with other law enforcement agencies was conducted resulting in the discovery of 4 firearms, 2 rifles and 2 pistols, along with a total 1,894 rounds of ammunition.

Nicholas is scheduled to appear in court on February 21, 2023.