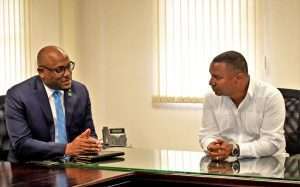 (CMC) – Chairman of the Barbados-based Caribbean Disaster Emergency Management Agency (CDEMA), Shawn Edward, is urging member countries that have defaulted on their financial obligations to the regional organisation to honour their commitments.

Edward, who is also the Sustainable Development Minister in St Lucia, told reporters that the regional disaster response agency was ramping up efforts to help residents better prepare for natural disasters.

While he was unable to disclose the amount owed to CDEMA by regional governments, Edward noted that some of the 19 members were not up to date on their commitments and efforts were being made to reach an amicable solution to the problem.

He acknowledged that while revenue streams had been restricted over the past two years “this is not in any way making an excuse for member territories who are defaulting on payments.

Edward said he was optimistic that in the near future, there will be some movements “in terms of the defaulting countries making good on their commitment and owning up and making their contributions available because funding is critical for the daily operations of the agency”.

CDEMA said that the Barbados government had agreed to pay US$130,647.21, increasing the total contributions payable to over US$1.343 million.

Edward, who is also St Lucia’s Minister of Education, Innovation, Science, Technology and Vocational Training, took up the chairmanship of CDEMA last August and paid a one-day visit to the agency’s headquarters on Tuesday meeting with senior management and other staff.