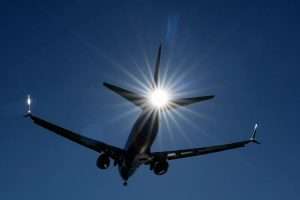 (AP) — The Federal Aviation Administration (FAA) is lifting a ground stop on flights across the US following a computer outage early Wednesday that resulted in thousands of delays and hundreds of cancellations quickly cascading through the system at airports nationwide.

The FAA ordered all departing flights grounded early Wednesday morning, but lifted that order just before 9am Eastern after several hours.

However, delays and cancellations continue to snowball.

More than 3,700 flights were delayed and more than 640 were cancelled.

The stop order by the FAA impacts almost all flights of shippers and commercial airlines.

More than 21,000 flights were scheduled to take off in the US today, mostly domestic trips, and about 1,840 international flights expected to fly to the US, according to aviation data firm Cirium.

Some medical flights could get clearance and the outage did not impact any military operations or mobility.

While the White House initially said that there is no evidence of a cyberattack, President Joe Biden said “we don’t know” and told reporters he has directed the Department of Transportation to investigate the cause of the disruption.

Biden addressed the FAA issue Wednesday before leaving the White House to accompany his wife to a medical procedure at Walter Reed National Military Medical Center outside of Washington. He said he had just been briefed by Transportation Secretary Pete Buttigieg, who told him they still had not identified what went wrong.

Buttigieg said in a tweet that he is in touch with the FAA and monitoring the situation.

The FBI did not immediately respond to a request seeking comment.

Delays were concentrated along the East Coast, but they are spreading quickly to the West Coast.

The FAA said it was working on restoring its Notice to Air Missions System.

“We are performing final validation checks and reloading the system now,” the FAA said. “Operations across the National Airspace System are affected.”

The agency said that some functions are beginning to come back on line, but that “National Airspace System operations remain limited.”