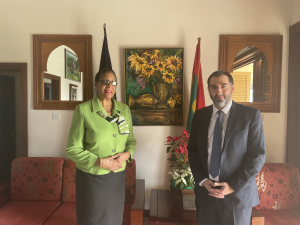 PR – Victor Clark replaces Wendy Freeman as the new Resident British Commissioner to  Grenada. He officially began his duties on Monday 9 January and will be the UK’s  representative on island for the next three to four years.

Victor last served in the Republic of Armenia as Deputy Head of Mission where in  addition to his management duties he led on issues such as trade, climate change and  conflict resolution. He has also been posted many times across Latin America and is  bilingual in Spanish.

Areas of focus during his time in Grenada will include climate change, health, education, security, good governance, infrastructure, renewable energy and the blue  economy.

“I am delighted and proud to have this opportunity to strengthen the partnership  between the UK and Grenada. We have so many shared values and together we can  build a sustainable, safe and more prosperous future. I’m looking forward to visiting  all parts of these beautiful islands to see and understand Grenada and its people, as  I strive to grow our close bonds of friendship and cooperation. ”

The British High Commission in St George’s remains committed to building and  preserving its relationship with the Government and people of Grenada.