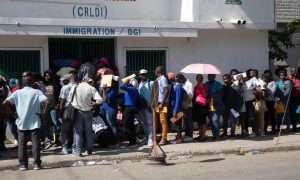 (CMC) – The New York Immigration Coalition (NYIC) has condemned New York Governor Kathy Hochul’s State of the State Address on Tuesday, saying that she failed to include Caribbean and other immigrant New Yorkers in her vision for New York in 2023.

“While we are grateful for Governor Hochul’s commitments to some key programmes, they are far from enough to ensure that all immigrant New Yorkers, including the over 30,000 newly arrived asylum seekers, have the support they need to integrate and thrive in New York State.”

The NYIC is an umbrella organisation of over 200 immigration advocacy and policy groups in New York state. In addition, many of the asylum seekers include Haitians, Cubans and Venezuelans.

“Without a full US$100 million investment in the Access to Representation Act and immigration legal services, funding our families remain at risk of being cruelly separated,” Awawdeh said. “Moreover, the lack of investment in health coverage for all New Yorkers, regardless of legal status, is no small oversight in light of the ongoing pandemic and the contributions of our communities to keeping New York open for business.

“Governor Hochul must further commit to supporting the passage and signing the New York for All Act so that our immigrant communities are no longer terrorised by ICE (Immigration and Customs Enforcement agency) and Border Patrol, and expanding Language Access further, so all New Yorkers can access services in a language they comprehend”.

Awawdeh said Governor Hochul cannot provide for some New Yorkers while leaving others out of the New York Dream she described in her address.

“Immigrants have always been the engine that fuels New York’s economy; and now, we need Govorner Hochul to recognise that fact and build a state that works for all of us regardless of our legal status or wealth,” he said.

“While paying lip service to tackle the very real affordability crisis that New Yorkers face, the Governor again failed to mention and support crucial measures for which our communities have been clamouring.

“As it relates to the current budget process, we are particularly concerned that she ignored the need to pass good cause protections for tenants, full inclusion of excluded workers in unemployment, the inclusion of immigrants in health coverage, and raising taxes on the wealthiest New Yorkers to invest in our New York.

“Our communities have been on the front lines of the pandemic for the past three years, and bear the brunt of the affordability crisis that the Hochul administration claims to want to tackle,” Oshiro added.