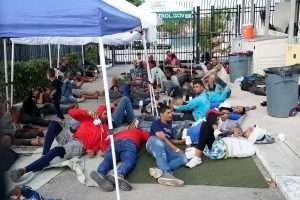 (CMC) – The New York Immigration Coalition (NYIC), has strongly denounced plans by the Joe Biden administration to limit migrants from the Caribbean into the United States.

On Thursday, the Biden administration announced that it was limiting migrants from Cuba, Nicaragua, Venezuela and Haiti who enter the US – 30,0000 each month under humanitarian parole – while expelling those who attempt to cross the southwestern border.

NYIC, an umbrella policy and advocacy organisation that represents over 200 immigrant and refugee rights groups throughout New York State said these plans will “cruelly favour” asylum seekers with family connections and financial privilege while demanding the expansion of additional protections for Caribbean nationals and other asylum seekers.

“President Biden’s plan to expel those who attempt to cross the border, announced earlier today, is an attack on the humanitarian values and obligations of the United States,” NYIC executive director, Murad Awawdeh said.

“This plan needlessly endangers the lives of those crossing the border in search of basic freedom in our country and succumbs to the fear-mongering espoused by anti-immigrant conservatives. President Biden must stop the hypocrisy of his immigration policies, and, instead, proudly stand up for all refugees and asylum seekers, as he has always professed to do,” Awawdeh continued.

“As Title 42 continues to be enforced by the Biden administration, cruelly subjecting asylum seekers to violence, this plan is a shameful slap in the face to those seeking safety in the United States,” he continued.

“Rather than limiting humanitarian parole for just a select few with family connections and financial privilege, the Biden administration must expand additional protections for all asylum seekers, so that our country can fulfil its humanitarian obligations and provide opportunity and freedom for all,” the director said.

In remarks at the White House, President Biden said his government would deny migrants from Cuba, Nicaragua, Venezuela and Haiti the opportunity to apply for asylum if they cross the Mexican border without permission between official ports of entry.

Biden said migrants from those countries, among tens of thousands of others who endeavour monthly to cross the border, would be expeditiously returned to Mexico instead.

“Today, I’m announcing that my administration is going to expand the parole program for people not only from Venezuela but from Cuba, Nicaragua and Haiti,” said Biden just a few days before travelling to Mexico City on Sunday for a two-day meeting with Mexican authorities.

“We anticipate this action is going to substantially reduce the number of people attempting to cross our southwest border without going through a legal process,” said Biden, announcing that Mexico has agreed to allow the return of up to 30,000 migrants per month.

The White House said in a statement that these measures will expand and expedite legal pathways for orderly migration from the Caribbean and other countries, and result in new consequences for those who fail to use those legal pathways.

It also said that the new measures draw on the success of the Venezuela initiative, which was launched in October 2022, “and has resulted in a dramatic drop in the number of Venezuelan nationals attempting to enter the United States unlawfully.”