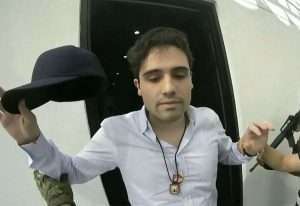 Ovidio Guzman, nicknamed “El Raton” (The Mouse), had allegedly helped to run his father’s operations since El Chapo was extradited to the United States in 2017.

The 32-year-old was rounded up Thursday in the northwestern city of Culiacan and flown to Mexico City on a military plane following six months of intelligence work to track him down, the government said.

“Ten members of the military… unfortunately lost their lives in the line of duty,” Defense Secretary Luis Cresencio Sandoval told reporters, adding 19 “lawbreakers” were also killed in the operation.

The United States had a reward out of up to $5 million for information leading to Ovidio Guzman’s capture. It accuses him of being a key player in the infamous Sinaloa cartel.

Gunfire and arson shook Culiacan after the arrest, which came as Mexican President Andres Manuel Lopez Obrador prepared to welcome his US counterpart Joe Biden next week for a North America leaders’ summit where security is expected to be high on the agenda.

Initial reports were that a National Guardsman was killed and at least 28 people wounded in the violence, while school classes were suspended.