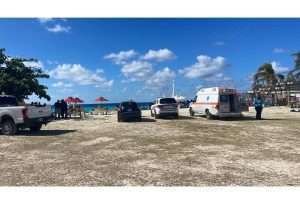 (CMC) –Rescue teams have found all four passengers on board an aircraft that originated from St Kitts, but crashed 17 miles south east of the airport in Providenciales, the Royal Turks and Caicos Islands Police Force (RTCIPF) has said.

“Following an intensive and exhaustive combined operation, the Royal Turks and Caicos Islands Police Force can confirm the four individuals involved in this morning’s aircraft crash were rescued this afternoon,” the police said in a statement.

Acting Assistant Superintendent of Police, Michael Francois, said “I especially want to thank fisherman Kellison Talbot who did an exceptional job in this rescue.

“He displayed courage and selflessness by placing his life on the line. Additionally, from the initial report received, the RTCIPF acted without hesitation by cordoning off a section at the beach and established a command centre.”

Francois, who did not provide any details about the plane or the passengers, said the rescue teams, including officials from the Department of Disaster Management and Emergencies and Air Support unit from the US Coastguard and Customs and Border Protection, “all worked tirelessly in our search for the missing individuals”.

The Turks and Caicos Islands Airports Authority in a separate statement said the small private aircraft en route from St Kitts to Providenciales with four passengers reported difficulties in the vicinity of Grand Turk.