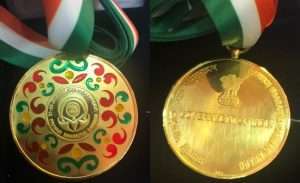 It said the other awardees are Trinidad and Tobago judge, Justice Frank Arthur Seepersad, and Suriname’s Dr Dewanchandrebhose Sharman.

The three Caribbean nationals will join 24 other persons of Indian origin or non-resident Indians who have been recognised by the Indian government for their outstanding achievements both in India and abroad.

The 17th PBSA will be conferred by the President of India as part of the upcoming Pravasi Bharatiya Divas (PBD) Convention (Indian Diaspora Day) to be held in Indore, Madhya Pradesh, from January 8-10.

The award will be conferred during the valedictory session of the Convention on January 10, and the Indian High Commission statement said that President Ali has been invited as the “Chief Guest” for the convention and will be travelling to India with a high level delegation comprising of both official and private sector representatives.

India’s High Commissioner to Guyana, Dr K J Srinivasa said the award to President Ali is  a recognition of the outstanding contributions he has made to Guyana and his efforts to bring about the rapid and equitable development of Guyana.