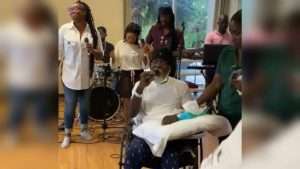 (JAMAICA OBSERVER) – Reggae star Freddie McGregor is reportedly recovering well at an undisclosed medical facility in Florida, after suffering a stroke a few weeks ago.

A video emerged on Thursday of McGregor singing one of his classics for staff members at the facility.

Sitting in a wheelchair, and backed by a band and backup singers, the Big Ship Captain delivered an almost flawless rendition of ‘I See It in You’.

There has been no official statement from the family.

McGregor has had to postpone his busy touring schedule and had to miss the UK tour of reggae band UB40.

The Big Ship label founder is also getting ready to release his album, A Breath of Fresh Air, produced by British company Stingray Records, to be released in early 2023.

For the past four decades, McGregor has been one of reggae’s front-runners. He is known for songs including ‘Big Ship’, ‘Push Comes to Shove’, ‘Just Don’t Want to be Lonely’, and ‘I’m A Winner’.