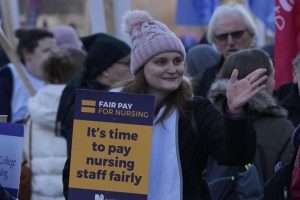 (AP) — The British government said Tuesday it will not offer more money to nurses and ambulance crews to end strikes that are piling pressure on an already overstretched health system.

Prime Minister Rishi Sunak’s Conservative administration is under pressure to increase its pay offer to health care staff who are seeking big raises in the face of decades-high inflation that was running at 10.7 per cent in November.

Thousands of nurses walked off the job Tuesday in their second 24-hour strike this month. Ambulance drivers, paramedics and dispatchers are set to strike on Wednesday and again on December 28.

They are joining railway staff, passport officers and postal workers in the UK’s biggest strike wave for decades, a response to a cost-of-living crisis driven by soaring food and energy prices in the wake of the COVID-19 pandemic and Russia’s invasion of Ukraine.

Pat Cullen, head of nurses union the Royal College of Nursing, urged Sunak to “step in now and do the decent thing on behalf of every patient and member of the public of this country” by negotiating over pay. The union has asked for a raise of 5 per cent above inflation but says it is willing to accept less.

The union says it will stage more strikes in January if there is no deal. Nurses have agreed to staff key areas including critical care and cancer services during the strikes, but thousands of operations and procedures have been canceled in England, Wales and Northern Ireland. Nurses in Scotland are not on strike.

The government says it will dispatch 1,200 troops to fill in for striking ambulance drivers and border staff, who are due to walk out later this week.

The government insists it can’t get directly involved in pay talks between unions and employers — but Sunak also told the Daily Mail that double-digit public sector raises would drive inflation even higher, which would “make people poorer in the long run.”

The government is calculating that public opinion will turn on the unions as people across the UK face postponed hospital appointments, canceled trains and travel delays during the winter holiday season. But opinion polls show a high level of support for the workers — especially nurses.

Britain’s health system is under strain from surging demand as pandemic restrictions ease, alongside staff shortages from burnout and Brexit, which has made it harder for Europeans to work in the UK.

Official statistics show that ambulances in many areas are stuck waiting outside hospital emergency departments, sometimes for hours, because there are no beds for the patients.

Rachel Harrison, national secretary of the GMB union that represents ambulance staff, said the delays and backlogs were “having a devastating effect on our members — frustration, stress, burnout, exhaustion, low morale, mental health.”