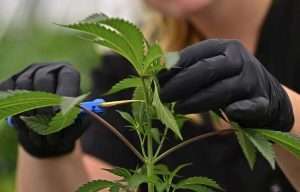 (CMC) – By December 2023, the Grenadian Government says it intends to present legislation to Parliament to legalise cannabis for medicinal purposes. The announcement was made by Minister for Agriculture and Lands Senator Adrian Thomas on Monday.

“In January we will be opening a secretariat so that the necessary work can be done,” Senator Thomas, who is also Leader of Government Business in the Upper House, said as he presented the 2023 Estimates of Revenue and Expenditure for debate in the Senate.

“There will be extensive consultation with the general public, involving education programmes, because our people must understand what this industry is all about. We want them to be part of it and, therefore, Madam President we have allocated over EC$400,000 (One EC dollar=US$0.37) to that first phase.”

Senator Thomas promised that changes to the pertinent legislation will be made by December 2023 to accommodate the industry.

“In 12 months’ times, the necessary legislation will be put in place and we will be ready to cultivate and process the necessary products from the cannabis,” he said.

Back in September, the government named a 12-member Commission on Cannabis Legalisation and Regulation, whose task includes holding broad-based consultations and engage in public awareness on the policy decision to legalise cannabis within a legal and regulatory framework.

Moves to legalise small amounts of cannabis began last year under the New National Party administration. In November 2021, after a series of consultations, a Bill was presented to Parliament proposing amendments to the Drug Abuse Prevention Act to allow anyone over 18-years-old to be in possession of up to 28 grammes (0.987671 ounces) of marijuana and to allow each homeowner over the age of 18 to grow no more than five trees.

The amendments also provided for members of the Rastafarian community to use the herb solely for religious purposes as a sacrament in adherence to the Rastafarian faith and at a place of worship.

However, smoking in a public place would be prohibited and a person who smokes or uses cannabis or cannabis resin in a public place commits an offence and is liable on summary conviction to a fine of EC$500. However, Parliament was dissolved for the June 2022 general election before the legislation could be passed.

Grenada’s Drug Abuse Prevention Act lists cannabis as a controlled narcotic drug and it is not lawful for a person to cultivate or be in possession of the drug.