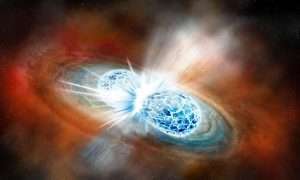 (AFP) — For the first time astronomers have identified a planet that is spiralling towards a cataclysmic collision with its ageing sun, potentially offering a glimpse into how Earth could end one day.

In a new study published on Monday, a team of mostly US-based researchers said they hope the doomed exoplanet Kepler-1658b can help shed light on how worlds die as their stars get older.

While similar in size to Jupiter, the planet orbits its host star an eighth of the distance between our Sun and Mercury, making it far hotter than the gas giant in our own Solar System.

Kepler-1658b’s orbit around its host star takes less than three days — and it is getting shorter by around 131 milliseconds a year, according to the study published in The Astrophysical Journal Letters.

“If it continues spiralling towards its star at the observed rate, the planet will collide with its star in less than three million years,” said Shreyas Vissapragada, a postdoc at the Harvard–Smithsonian Center for Astrophysics and the study’s lead author.

“This is the first time we’ve observed direct evidence for a planet spiralling towards its evolved star,” he told AFP.

An evolved star has entered the “subgiant” phase of the stellar life cycle, when it starts expanding and becoming brighter.

Kepler-1658b’s orbit is being shortened by the tides, in a similar process to how Earth’s oceans rise and fall every day.

This gravitational push-and-pull can work both ways — for example the Moon is very slowly spiralling away from Earth.

So could Earth be heading towards a similar doom?

“Death-by-star is a fate thought to await many worlds and could be the Earth’s ultimate adios billions of years from now as our Sun grows older,” the Center for Astrophysics said in a statement.

Vissapragada said that “in five billion years or so, the Sun will evolve into a red giant star”.

While the tidally-driven processes seen on Kepler-1658b “will drive the decay of the Earth’s orbit towards the Sun,” that effect could be counter-balanced by the Sun losing mass, he said.

“The ultimate fate of the Earth is somewhat unclear,” he added.

Kepler-1658b was the first exoplanet ever observed by the Kepler space telescope, which launched in 2009. However it took nearly a decade of work before the planet’s existence was confirmed in 2019, the Center for Astrophysics said.

Over 13 years, astronomers were able to observe the slow but steady change in the planet’s orbit as it crossed the face of its host star.

One “big surprise” was that the planet itself is quite bright, Vissapragada said.

Previously it had been thought this was because it is a particularly reflective planet, he said.

But now the researchers believe the planet itself is far hotter than anticipated, possibly due to the same forces that are driving it towards its star.