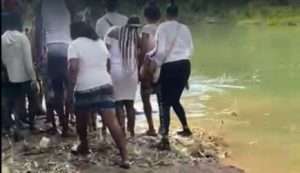 (JAMAICA OBSERVER) – A male resident of the United Kingdom and a child drowned at a river in Mullet Hall, Chapelton in Clarendon on Friday.

The deceased have been identified as 34-year-old Remo Douglas, a warehouse operator of Bedford Street in the UK and Danks-Savoy district, Chapelton in Clarendon, and 11-year-old Brehania Syndale of Hill Avenue, Kingston 11.

A video making the rounds on social media shows the two bodies lying on the riverbank after being retrieved from the deceptively deep water.

The two bodies were reportedly retrieved from the water by a resident who was in the vicinity. The police were summoned and they were transported to the hospital where both were pronounced dead.

The Chapelton police are investigating.