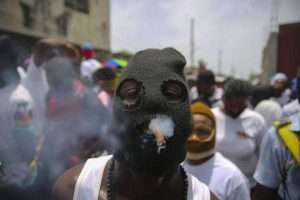 (CMC) – The Conference of Catholic Bishops of Haiti (CEH) has condemned the rampant violence in the French-speaking country while calling on criminal gangs and those who finance them “to stop the murderous madness of hatred, [and] of contempt for life”.

In a Christmas message which was issued following their Plenary Assembly, the CEH’s bishops said they deplored the diabolical and perverse logic of weapons which they said is farthest from the will of God.

“Instead of fratricidal war, we must invest in peace and love, in the reorganisation of our infrastructure, health and education systems, as well as the change of our mentalities. It is time to rebuild our institutions, especially Justice, to curb the culture of impunity which is the logical cause of the perpetuation of corruption and violence in the country in order to guarantee, in a spirit of belonging to this land of Haiti, a better future for future generations,” the bishops said.

Haiti has been plunged into chaos with criminal gangs involved in kidnappings for ransom and opposition political parties staging street demonstrations calling for the government of Prime Minister Dr Ariel Henry to step down. The opposition parties have also been calling for fresh presidential and legislative elections.

Henry, who took over the leadership of the country following the assassination of President Jovenel Moise in July 7 last year, has urged the international community to send in troops to assist in maintaining law and order.

Henry has been condemning people whom he said want to acquire political power in the country without first seeking a mandate from the population. He has given a commitment that the country will be in election mode before the end of 2022, though that appears to be unlikely.

The CEH said that as other sectors of society have already expressed, “we believe that it is necessary and urgent to provide effective support to the National Police both in equipment, logistics and combat conditioning as well as in treatment and review of personnel to help fight the scourge of crime and create a climate conducive to the normalisation of life in the country.”

Continuing, the bishops said: “The establishment of a security climate in the country remains one of the necessary conditions for the resumption of economic, cultural and social activities and the organisation of democratic and transparent elections.”

The bishops warned that the “unbearable conditions of the country push a large number of our compatriots to take refuge, in all haste and by all means, in territories where they are not always welcome”.

While not naming the Dominican Republic, the CEH in its statement said that “closer to home, in the neighbouring Republic, Haitians are subjected to unspeakable treatment, which tramples on the principles and imperatives of human rights, international humanitarian law, refugee law and, especially, the Protocol of 1999 Agreement on the conditions for processing the return of illegal Haitian migrants.”

“This affects the relations of friendship and good neighbourliness between the citizens of the two Republics and creates intergenerational friction. In this sense, we of the Conference of Catholic Bishops of Haiti are in talks with the Conference of Dominican Bishops on this migration issue,” the bishops announced.

They have also issued an invitation to the authorities to take the appropriate measures to rectify the situation and to improve the conditions of existence and well-being of the Haitian people in order to encourage them to stay at home.

“We encourage, moreover, a gesture of appeasement capable of releasing tensions in migratory relations between the two countries condemned to share common borders indefinitely and live together,” the CEH added.