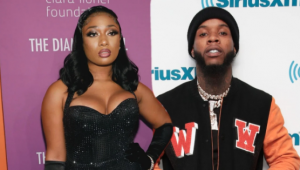 (AFP) — Rapper Tory Lanez told Megan Thee Stallion to “Dance, b****” as he shot at her feet during an argument in Hollywood, a jury in Los Angeles was told Monday.

Lanez, whose real name is Daystar Peterson, faces a raft of charges relating to a 2020 dispute with the rap queen, including assault with a semiautomatic firearm and using a firearm to inflict great bodily injury.

Prosecutor Alexander Bott said Lanez and a bikini-clad Megan Thee Stallion — real name Megan Pete — got into a row as they drove away from a pool party at Kylie Jenner’s house in July 2020.

Bott told the jury the “Hot Girl Summer” artist had insulted Lanez and demanded to be let out of the luxury SUV they were travelling in.

As she stood on the road, Lanez told her “Dance, bitch” and fired five rounds in her direction.

She left a trail of blood at the scene, before getting back into the vehicle, which was subsequently stopped by police.

A gun that was still warm to the touch was found on the floor near where Lanez had been sitting, Bott said.

In a later phone call, Lanez “profusely apologized for his actions” and claimed he was “just too drunk,” Bott told jurors.

Megan Thee Stallion is expected to take the stand on Tuesday.

He insisted this was a “case about jealousy,” and that he would prove the accusation were lies.

Earlier court hearings have been told that Megan Thee Stallion initially told doctors who treated her injured feet that she had cut them on broken glass.

Several bullet fragments were removed from her feet, but some remain and she told investigating officers that she had difficulty walking in certain shoes.

She initially denied Lanez had shot at her — but later said she had done so for fear he would get into trouble.

Megan Thee Stallion subsequently posted a video to Instagram Live in which she said “Tory shot me. You shot me and you got your publicist and your people… lying… Stop lying.”