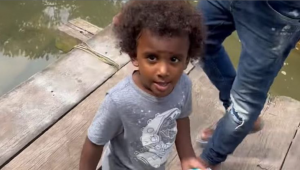 (TRINIDAD EXPRESS) – The body of missing two-year-old Allon Ramdial was found this morning, washed ashore near the mouth of the Ortoire River, Mayaro.

The child was reported missing by his 19-year-old mother, Cristianna Ramdial, on Friday morning.

Since then, there has been an extensive search by the Hunters Search and Rescue Team, villagers, TT Coast Guard and police.

In a brief interview with the Express Hunters Search and Rescue Team pleader said, “The child was found near the end of the mouth of the river at around 11.40am. It was a joint effort and he was found in an area that is only accessible by boats. As we were approaching the area we saw the vultures circling and we went there. We found the child’s body,” he said.

The body was in an advanced state of decomposition, he said.

This morning, Ramdharat made an appeal for local divers to join the search as extensive searches in the area had been unsuccessful.

At around 10am, Rambharat said, two lifeguards arrived at the scene to join in the search.

Little Allon was reported missing last Friday, after his mother discovered he was missing from their room at the Ortoire Fishing Port Facility. His mother, 19-year-old Cristianna Ramdial, said she raised an alarm and neighbours began searching for the little boy.

The Express found that only a few steps separate the mother and child from the jetty leading to the Ortoire River.

Mayaro MP Rushton Paray said the entire community was praying for the child. He said all agencies were involved in the search.