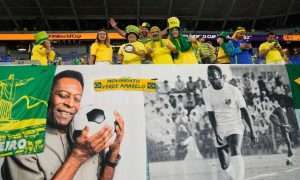 (AFP) — Brazilian football legend Pele’s health continues improving, but no date has been set for his release from hospital, where he was admitted nearly two weeks ago, doctors said Monday.

Pele, 82, considered by many the greatest footballer of all time, was hospitalized in Sao Paulo on November 29 for what his medical team called a re-evaluation of his chemotherapy treatments, which he has been receiving since having surgery to remove a colon tumor in September 2021.

Doctors also diagnosed him with a respiratory infection.

“There is no date set for his release, (but) the patient’s clinical condition continues improving, especially the respiratory infection,” the hospital said in a statement.

“He remains in a standard room, conscious and with stable vital signs.”

Pele’s daughters Kely Nascimento and Flavia Arantes have sought to reassure his fans on his health, denying reports that he has been placed in end-of-life care.

Nascimento, who lives in the United States, posted a pair of pictures from the hospital on Instagram Monday, including one of her hand holding her father’s, with the message: “I arrived.”

“The King” has been in fragile health in recent years, and his public appearances have grown rare. But he remains active on social media.

He has posted regularly online during the World Cup, including a message of support to current Brazil star Neymar after the “Selecao” crashed out of the tournament in Qatar in a quarter-final loss to Croatia Friday.

“Keep inspiring us,” Pele told the 30-year-old Paris Saint-Germain striker, who equalled his record of 77 goals for Brazil during the match.