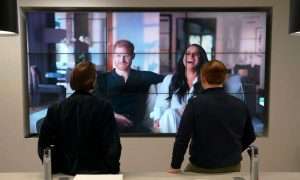 (AP) — Prince Harry and his wife, Meghan, stuck to a familiar script in a new Netflix series that chronicles the couple’s estrangement from the royal family, chastising Britain’s media and the societal racism they believe has fuelled coverage of their relationship.

The first three episodes of “Harry and Meghan,” released Thursday, dissect the symbiotic relationship between tabloid newspapers and the royal family and examine the history of racism across the British Empire, and how it persists.

The storytelling relies on interviews with the couple, their friends, and experts on race and the media. The series does not include dissenting voices, and there is no response from any of the media organisations mentioned.

“In this family sometimes, you know, you’re part of the problem rather than part of the solution,’’ Harry says in one of the episodes. “There is a huge level of unconscious bias. The thing with unconscious bias is that it is actually no one’s fault. But once it has been pointed out, or identified within yourself, you then need to make it right.”

The media’s treatment of Meghan — and what the couple felt was a lack of sympathy from royal institutions about the coverage — were at the heart of their complaints when they walked away from royal life almost three years ago and moved to Southern California. Lucrative contracts with Netflix and Spotify have helped bankroll their new life in the wealthy enclave of Montecito.

Promoted with two dramatically edited trailers that hinted at a “war against Meghan,” the Netflix show is the couple’s latest effort to tell their story after a series of interviews with US media organisations, most notably a two-hour sit down in 2021 with Oprah Winfrey.

The first three episodes break little new ground on royal intrigue, leading one British-based analyst to conclude that the main audience Harry and Meghan are trying to reach is in the United States.

The series is an effort by Harry and Meghan to cement their place in American society, where fame and riches await, says David Haigh, chief executive of Brand Finance, which has analysed the monarchy’s value to the UK economy.

“They are trying to become the next Kardashian family. And they are using the fame and notoriety of the monarchy as their stepping stone to get there,” he said. “No one would take the remotest bit of interest in either of them if they weren’t strongly associated with the UK monarchy.”

The series comes at a crucial moment for the monarchy. King Charles III is trying to show that the institution still has a role to play after the death of Queen Elizabeth II, whose personal popularity dampened criticism of the crown during her 70-year reign. Charles is making the case that the House of Windsor can help unite an increasingly diverse nation by using the early days of his reign to meet with many of the ethnic groups and faiths that make up modern Britain.

Harry’s 2018 marriage to the former Meghan Markle, a biracial American actress, was once seen as a public relations coup for the royal family, boosting the monarchy’s effort to move into the 21st century by making it more representative of a multicultural nation. But the fairy tale, which began with a star-studded ceremony at Windsor Castle, soon soured amid British media reports that Meghan was self-centered and bullied her staff.