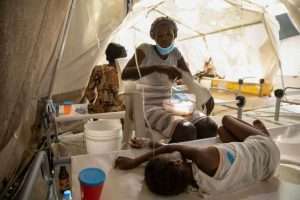 (AFP) – The United Nations (UN) appealed Thursday for millions of dollars from donors to help battle an intensifying outbreak of cholera in Haiti that has left nearly 300 people dead.

Ulrika Richardson, the UN’s humanitarian coordinator for the impoverished Caribbean country, said the organization had raised only $23.5 million of the $145 million it asked for in a flash appeal to fight the epidemic.

“Cases continue and you have now 283 people that died from the illness, and we also have close to 12,000 people that have been hospitalised” since the resurgence of the disease in October, she told reporters.

She said the epidemic has spread to eight of Haiti’s 10 regions in a “worrying trend.”

In mid-November, the number of cholera-related deaths was 161 and hospitalizations 7,500.

Richardson hoped responses to the flash appeal would pick up.

“I’m really grateful for those donors who responded positively, but it’s only 16 percent of the total amount” the UN is seeking, she said.

She said the United Nations is now organizing its entire humanitarian response plan for Haiti for next year, with a total value of $719 million, double this year’s outlay.

“It’s an indication of the humanitarian needs in Haiti. So it is a worrying situation. The insecurity continues to be rampant,” she said.

The country, the poorest in the region, is beset by gang violence and political instability that has led to calls for an international security intervention.

“This insecurity and the gang domination is now close to 60 percent of the entire capital,” she said.

The gangs use sexual violence for punishment and as a weapon to keep populations under control and in “a state of fear,” she said.