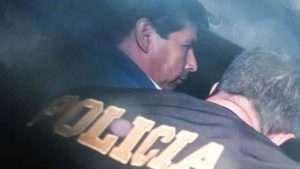 (AP) — In just three tumultuous hours, President Pedro Castillo went from decreeing the dissolution of Peru’s Congress to being replaced by his vice president, but the threats against his government had been building throughout his nearly 17-month presidency.

The former school teacher and center-left political novice, who won a runoff election in June 2021 by just 44,000 votes, stepped onto a no-holds-barred political battlefield in Peru, the South American country now on its sixth president in six years. By nightfall Wednesday, after a day of high political drama, prosecutors had announced Castillo was under arrest, facing charges of rebellion.

From the start, Castillo’s presidency seemed destined to be short-lived, said Flavia Freidenberg, a political scientist at the National Autonomous University of Mexico and a member of the university’s Latin America Political Reform Observatory.

“He is a president who took office with a very low level of support, he didn’t have a political party, he had a hard time putting together a Cabinet, the Cabinet has changed constantly and there has been a constant power struggle with Congress,” she said.

Castillo, a rural school teacher from an impoverished district high in the Andes, was considered a clear underdog when he joined the race to replace President Francisco Sagasti, who had been appointed by Congress in November 2020. Sagasti was the last of three heads of state Peru cycled through in one week that November.

Castillo campaigned on promises to nationalise Peru’s key mining industry and rewrite the constitution, gaining support in rural Peru. But upon taking office in July 2021, Castillo immediately struggled with his Cabinet choices, a number of whom have been accused of wrongdoing.

“He didn’t unify the country,” said Eric Farnsworth, vice president of the Council of the Americas. “He doesn’t even seem to make much of an effort along those lines.”

“He didn’t have much of a mandate, and so he did not promote policies somehow that were easily identifiable as for the good of the majority of the people,” Farnsworth said. “Instead, he became embroiled in intrigues, corruption and battles with Congress.”

The first attempt to impeach Castillo came last December At the time, a relatively small group of opposition lawmakers cited an investigation by prosecutors into illicit financing of the governing party. To remove the president requires two-thirds of the 130 lawmakers to vote in favor. Only 46 voted in favor.

Congress tried to impeach Castillo again in March for “permanent moral incapacity,” a term incorporated into Peruvian constitutional law that experts say lacks an objective definition and that Congress has used more than a half dozen times since 2017 to try to remove presidents. The effort failed, this time with only 55 votes in favor.

Each time, Castillo defended himself, arguing he had done nothing wrong.

“I salute that common sense, responsibility and democracy prevailed,” Castillo tweeted after the second attempt.

He benefited from the fact that the unicameral Congress was deeply divided. Castillo’s party had the most seats, but with only 37, it alone could not protect him.

On Wednesday, Peru was girding itself for a third impeachment vote. Perhaps Castillo feared this time there would be enough votes to oust him.

The night before, the president said in an unusual midnight address on state television ahead of the vote that a certain sector of Congress had it out for him and that he was paying for mistakes made due to inexperience.

Shortly before noon Wednesday, Castillo went on state television and announced the dissolution of Congress. He said elections would be held to choose new lawmakers and a new constitution would be written.

Various members of his Cabinet resigned immediately. Vice President Dina Boluarte said via Twitter that the move only contributed to Peru’s political crisis. The Supreme Court, Constitutional Tribunal and national ombudsman rejected it as an attempted coup.

Castillo was driven from the presidential palace through Lima’s historic downtown to a police station. Hours later prosecutors announced that Castillo had been arrested on a charge of rebellion.

Two hours after his announcement, lawmakers who had ignored Castillo’s decree voted to remove him. This time they had the votes: 101 in favor, six against and 10 abstentions.

At 3 pm, Dina Boluarte, a 60-year-old lawyer, was sworn in as Peru’s first female president.

Boluarte said her first order of business would be to address government corruption, ostensibly what led to Castillo’s downfall. She had been expelled in January from the Marxist Free Peru party, which Castillo rode to power, for what she said was not sharing the ideas of its secretary general.

“There has been an attempted coup … that has not found an echo in the institutions, nor in the street,” Boluarte said. She called for a political truce to install a national unity government.

“What I ask for is a space, a time to rescue the country,” she said.

Freidenberg, the political scientist, said Boluarte’s swearing in was a hopeful sign. “It is a singular opportunity to show Peruvians women’s abilities in a country that is chauvinist, misogynist, discriminatory and where women have had so much trouble trying to access government.”

But Boluarte also takes office with a weak mandate and no party.

“She has to begin to govern in a way that outreaches to political opponents and also seeks to unify a coalition of supporters,” said Farnsworth of the Council of the Americas. “In order to have a working government, you have to have a coalition big enough to advance policies and legislators behind you.”

Hanging over the early days of her administration will be the question of what to do with Castillo. Prosecutors vowed to investigate the ex-president for allegedly rebelling against Peru’s constitutional order.

In the streets, despite the tumult, only small-scale clashes erupted between protesters and riot police — outside a police station where Castillo was taken.

Farnsworth wondered whether Castillo would be put on trial or allowed to seek asylum in another country.

“What do the Peruvian people want? Will they go to the streets and protest and riot or will they give things a chance to calm down and return to some kind of normalcy?” he said. “So I don’t know what’s going to happen in the immediate term, but there are some big questions about this.”