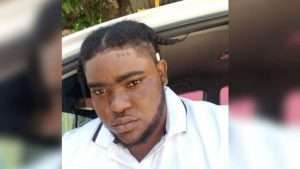 (JAMAICA OBSERVER) – A Westmoreland family is left heartbroken after their relative was murdered one day shy of becoming a father.

The deceased has been identified as 23-year-old Otis Rattray Jr, from the community.

Rattray Jr’s body was found riddled with bullets in his bed at his Dalling Street home in Savanna-La-Mar in the parish on Wednesday morning.

He was discovered by his younger brother who went to check on him.

He said he then entered the house to find his brother motionless on the bed.

“At first mi think a poison because him mouth did froth blood, but as mi remove di sheet mi realise seh him get shot,” Daniel added as he fought to hold back the tears.

The young man said he then ran out the house in disbelief.

His grandmother, Carmen Rattray, said she is saddened by the news of her grandson’s death.

“A mi grow him and him duh everything fi mi. A him me did a depend on to take mi to bible study tonight,” she said in a sombre tone.

His grandmother said he was never in a rift with anyone and described her late grandson as quiet.

“Him a nuh trouble maker, a yesterday him come look for me and ask if mi nuh have nutten to eat,” the distraught woman recalled.

She said she heard of the news when her other grandson ran and fell on her verandah, collapsed and yelled “dem kill trae, dem kill trae, trae dead,” she recalled as tears ran down her cheeks.

The elderly woman told OBSERVER ONLINE that the parish is dangerous despite a reimposition of a State of Emergency (SOE) on Tuesday.

“Westmoreland dangerous enuh, Westmoreland get terrible. SOE works but a just inna the area where dem deh,” she reasoned.

Rattray’s friend, who did not want to be identified by name, also said he is surprise to hear that his life was snuffed out in this manner.

“Is a quiet guy, a mi brethren. A last week him a seh we a guh drink fi di Christmas, bwoii it sad. Him nuh get fi see him baby born,” the seemingly disheartened man said.

He too attested to Rattray’s quiet demeanor.

“He’s a peacemaker, him quiet and nice,” he added.

According to the Jamaica Constabulary Force’s crime statistic data, as of December 5, Westmoreland has recorded 136 murders, 17 more than the corresponding period last year.