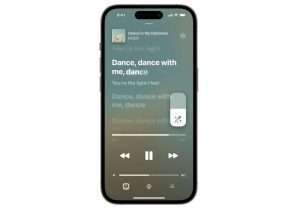 (AP) — Apple Music wants to help you and your friends sing along to your favourite songs with a new feature it is rolling out just as people gather for end-of-year parties.

Apple Music Sing gives the user the ability to adjust a song’s vocals and an enhanced beat-by-beat lyric display, which both draw on the platform’s massive song library. The result is what Apple hopes will be an effortless invitation to karaoke.

“The level of engagement around our lyrics features is pretty phenomenal and we’re going to extend on that and make it not just easy for fans to read along to lyrics, but also to sing along with their lyrics,” Rachel Newman, global head of editorial at Apple Music, tells The Associated Press.

Display lyrics have been enhanced, going from line-by-line previously to syllable-to-syllable now, including breaking out the backup vocals and animating them separately.

For duets, the lyrics switch from the left side of the screen to the right depending on who is singing, making it easier to anticipate your timing.

Some users might want to take the lead on the song and have their stage moment. For others, it could mean getting a vocal assist and singing duet with their favourite artist.

“You’ll be able to adjust the vocals and sing with real-time lyrics in multiple views and on all of our platforms. So, it’s all integrated into the lyrics experience and it’s pretty magical and super fun,” said Newman.

Apple Music is also supplying over 50 playlists that range from genres like pop and country to a decade roam and different themes.

Apple Music Sing will be available for iPhone, iPad and Apple TV models later this month.

The streamer has also made Apple Music Replay ready this year. The feature lets users see and hear charts of their favourite songs, albums, artists and playlists from the past year as well as total minutes on the service. One new feature is that superfans can discover whether they are in the top 100 listeners of their favorite artist or genre.

Apple Music had a big 2022 itself, hitting a milestone in October when it notched its 100 millionth song on the streaming service. That’s more than YouTube Music’s 80 million songs, Spotify’s 82 million tracks and podcasts and Amazon Music’s 90 million songs.