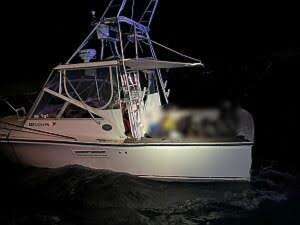 The Coast Guard said officials at Palm Beach Sheriff’s Office notified Sector Miami watchstanders of a suspicious 30-foot boat that was taking on water, on November 25, at approximately 10:30 pm.

“Smugglers do not care whether your loved ones live or die,” said Acting Lieutenant Nicholas Fujimoto, Coast Guard District Seven.

“Don’t waste your hard-earned money on smugglers and illegal voyages,” he warned.