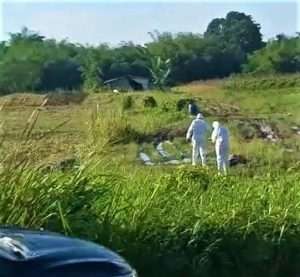 (TRINIDAD EXPRESS) – The bodies of two men, each with a chop wound to the neck, were found in an agricultural plot of land in Rivulet Road on Monday morning.

Next to the bodies, was a pair of crutches.

At the scene, police obtained a Trinidad and Tobago national drivers permit and a Venezuelan identification card bearing the name Darrin James, of Market Street, Chaguanas.

The discovery of the bodies was made at around 6.30 a.m. by a team of farm workers who went to the land to cultivate and contacted police.

Officers of the Central Division Task Force South Unit responded to the scene, located approximately 600 meters east of the traffic light intersection Rivulet and 50 feet off the roadway southern side observed the bodies of two men of mixed decent.

One of the deceased was clad in a pair of three-quarter short pants.

The other wore a pair of blue jeans and a jersey.

Both bodies lay on their back and the pair of walking crutches was found next to the bodies.

Homicide officers ASP Persad and other detectives, Insp Sylvan, Sgts Harriot and Modeste, and others of the Couva CID also responded.

The bodies were removed from the scene.