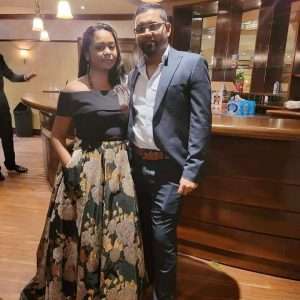 (TT GUARDIAN) – A Central couple who planned on spending the rest of their lives together were found shot dead in a car located in an abandoned cane field at Factory Road, Chaguanas yesterday morning.

The bodies of Randy Ramdass, 28, of Chandernagore Road, Chaguanas and his fiancée Stephanie Anita Jagdeo, 27, of Brickfield Road, Carapichaima, were discovered in Jagdeo’s Nissan AD Wagon.

Jagdeo’s body was found in the front seat while Ramdass’ body was in the rear trunk compartment of the vehicle.

Police said they also found a quantity of marijuana in the vehicle.

Angry relatives believe that the couple was set up and the drugs planted as a detraction to mislead investigators.

The two were out in connection with the sale of a parcel of land.

Jagdeo’s relatives were in a state of disbelief when we visited their home yesterday.

“She was home yesterday (Saturday) and she left home about minutes to four. She received a call. She is in her business of real estate so as somebody call you with land or a house to sell, that is your business, so you would take the opportunity to go for it,” Stephan Jagdeo, the brother of Stephanie said.

He added, “She left home to view a piece of land in Couva but the information we are capturing now is a lot to process. Other persons who had a discussion with her on Friday within her workspace, received a call from a gentleman. The person used an alias name. He had a piece of land to sell and he didn’t want his wife to know about the land and they wanted to go and view the land. He had no transport and they took him with their transport and that was it. From yesterday 4 pm she was unreachable up to today.”

Jagdeo said his sister worked at Alescon Readymix and sold real estate part-time. He said the couple had completed 85 per cent of their house at Lime Head Road, Chase Village and planned to get married in 2023.

“Whoever did this act, didn’t know what they were doing. They didn’t know their plan and executed it in this such manner to throw off the investigation. I would tell you personally, what they put in that car have nothing to do with my sister nor Randy. The individual who committed that act, wherever you is sir, I hope you rest in peace. God has a plan for you in time to come and whoever this is, something has business in it and whoever is the people who orchestrated this whole entire murder, not one, two lives lost, double lives lost, the people who called the shot upon my sister be very careful.”

At the home of Ramdass, his father Amar Ramdass, 50, was being consoled by relatives.

His grandmother Carmelita Ramdass, 78, was trying to cope with the death.

“All I want is justice, to see whosoever do this with my grandchild…I want justice.”

Carmelita took care of Randy when his mother died over 20 years ago.

Nandaram Ramdass, the paternal uncle of the deceased also rubbished the drugs found in the car. Ramdass too said it was planted to distract investigators.

Ramdass said when Randy didn’t return Stephanie’s father came looking for her. He said Randy was a hard worker.

“He don’t be in anything out of the ordinary.”

Ramdass said his nephew was an electrician who went into real estate around two years ago.

Couva North Member of Parliament (MP) Ravi Ratiram said the deceased once shared a close relationship with the office of the MP.

Ratiram said the murder appeared to have been committed elsewhere since police discovered a trail of blood leading to where the vehicle with the bodies was discovered.

Ratiram said he also believes the drugs in the vehicle were also planted to throw off investigations.

“We have lost count of the number of murders. The question is how many more Prime Minister? How many more must die before you act, before you do something?”

Ratiram said the Minister and Ministry of National Security are failing the people of T&T.

Ratiram said several calls have been made for increased lighting in his constituency and to properly equip the police service in central.

He accused National Security Minister Fitzgerald Hinds of sleeping on the job.

“He is sleeping on the job and it’s about time that PM, that you take action and you recognise that is no longer playing politics and playing with emotions. You are playing with lives of the citizens. The first constitutional right that citizens have is the right to life and you are not upholding that.”

Police are yet to establish a motive for the killings.