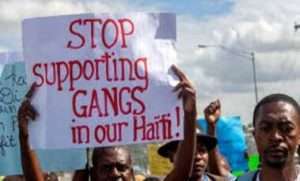 (AP) — More than 12 people were slain and numerous homes set on fire in a community near Haiti’s capital as gangs fight to control more territory, a mayor said on Thursday.

The community recently appointed local residents to serve as guards given a spike in violence across Haiti, but they were overpowered by gangs with machine guns, he said.

“There was nothing they were able to do to defend themselves,” Guillaume said. “This is a terrible incident.”

Pictures and videos shared on social media show the bodies of mutilated victims strewn outside their homes and fires burning through the night, consuming more than 20 houses.

Guillaume called on Haiti’s National Police to bring those responsible to justice and to strengthen the presence and resources of officers in Cabaret, which he said has become “a lawless zone.”

He also urged town residents to show solidarity and take in those fleeing their homes to avoid being killed by “merciless gangs” and “be with them during these difficult times.”

The killings are the latest blamed on gangs who have grown more powerful since the July 2021 assassination of President Jovenel Moïse.