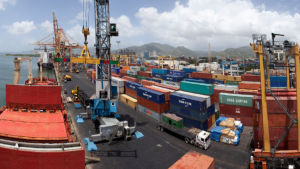 (TT GUARDIAN) – The Joint Select Committee (JSC) of Parliament on National Security yesterday heard that some 19,000 containers entered T&T over an eight-month period without being checked by customs officials.

The reason – there are no longer any working scanners at any of the major seaports across the country.

The JSC was given the startling information when it met top officials of the Customs and Excise Division to discuss the factors that are contributing to the prevalence of illegal firearms and gun violence in this country.

Soon enough, Customs found themselves in the JSC’s firing line.

From the get-go, Comptroller of Customs Vidyah Marcial said the division was in desperate need of new scanners and staff.

The JSC was told its organisational structure called for 700 staff members but at the moment they have only 272 experienced officers and 82 recently hired and acting officers.

As it related to scanners, the Customs officials indicated that the scanners donated by the United States are not working anymore and need to be replaced.

“Unfortunately, the only scanners we have operational are the ones in the baggage room at Piarco (International Airport),” Harris said.

Comptroller Marcial went on to explain that they had started the process to acquire four new scanners at the cost of US1 million each.

JSC member, Senator Nigel De Freitas, was not comforted by the scanner management.

“The fact is it is being said right now, and the TTPS (Trinidad and Tobago Police Service) is taking licks for it, that illegal firearms are coming in through the legal ports of entry and the major responsibility for that is customs. What do you guys have to say for that?” he asked.

Harris said that they have resorted to physical examination of containers by doing risk assessments and “unfortunately, that is the best available avenue at this point in time.”

She said as an example, they have 14 bays at the Port of Port-of-Spain but can only assign three officers at a time to check the containers assigned to them. She said because of that, their “efficiency is compromised.”

But when De Freitas called for statistics on how many containers are being scanned, committee members were astonished by the disclosure.

Harris said they only have the fixed scanner operational at the Port of Port-of-Spain and “for January to August, we scanned 3,998.”

JSC chairman Keith Scotland interjected and asked out of how many.

That resulted in whistles and woos from committee members.

Then there was somewhat of a tongue-lashing targeted at the division.

It started with member Randall Mitchell, who took umbrage with the constant use of the word unfortunate.

“Do you accept that the word is not unfortunate but the word is gross negligence on the part of the Customs Division?”

That was followed by member Ayanna Webster-Roy, who informed the Customs officials that she was “a little bit disturbed right now.”

Senator Paul Richards was next to chime in with the criticism.

“I am very disappointed in what I have heard so far,” he said.

Quoting statistics provided by the Strategic Services Agency (SSA,) Richards said as of 2021, the market value of illegal guns entering this country stood at $144 million.

“It’s causing havoc in the country, literal havoc,” he said.

But Comptroller Marcial said her division had not fallen down on the job.

“We are really trying, I know that is not sufficient, we have to get the job done,” she said.

She was then asked by member Dr Roodal Moonilal to grade herself, and she said B-plus.

It was only on Tuesday, while commenting on the number of illegal weapons seized by the TTPS while coming into the country via legal ports of entry during the past year, that acting Commissioner of Police Mc Donald Jacob asked, “Why don’t we call for the head of Customs and other persons to go?”

Jacob seemed to be referencing the fact that while he was being asked to step down due to the TTPS’ failure to get a handle on crime, other state entities which were mismanaging areas of national security were not being assessed similarly.