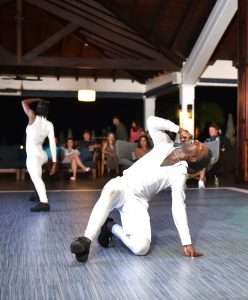 PR – From the rivers of Mt. Rich to the shores of Sandals Resorts, Dance Captain and Entertainment Supervisor Kimony Benjamin has overcome many challenges on his journey to success. With humble beginnings in the parish of St. Patrick, the firstborn of Mayann Benjamin fondly recalls his boyhood days picking fruit in the rolling hills and the weekend rituals of washing at the river with his mother and cousins, “We didn’t have everything, but we had each other, and my mother’s awesome example of hard work paying off.  She always won special awards at work and we were all so proud of her.”

The apple doesn’t fall far from the tree- in his six- year tenure at Sandals Grenada, Kimony has amassed 13 monthly awards and two annual awards in the resort company’s Prestige Awards programme. After starting in 2016 as a guest activities coordinator, in 2021 the vibrant and skilled dancer was promoted to Entertainment Supervisor, but before that he meandered into photography in 2019.

Kimony shared, “I wanted to learn a new skill and experience another department and there was the opportunity to join the photography team. I am so grateful I was allowed to explore that option to attain a new skill. The training was extensive and constant and that was something that I took with me when I eventually found my way back to Entertainment; frequent practice and practicing well makes a world of difference. Naturally I had to return to my passion, at the end of the day I am an entertainer at heart.”

According to Entertainment Manager, Joel ‘Jazz’ Johnson, Kimony’s potential was undeniable. “No doubt he was talented, but only known for his street style of dancing. When he returned to our department, he came back even more inspired. I observed even more zeal, drive, and willingness to learn more and do greater things. Most notably, I advised him to expand his dance repertoire and he did. He learned Latin and Contemporary as well. He has grown so much and the team has benefited from his creativity as our lead choreographer. Give Kimony a concept and a masterpiece comes afterward. He has the rave reviews and accolades to prove it.”

The daily and nightly entertainment is central to the company’s Luxury-Included® offerings. There are daily themes and for special major events such as Christmas, New Year’s, and most recently Halloween- Kimony coordinates the main production, a role that may weigh heavily, but one that he also enjoys.

“My strength is being in control on stage, controlling the audience’s gaze and their emotions, taking them on a journey and ultimately sharing joy with them. When people enjoy my dancing or a piece that I crafted that’s my ultimate reward.”

Aside from his work on stage, Kimony enjoys being of service to others and is a champion of any good cause. According to Johnson (Entertainment Manager), “Kimony goes beyond the call of duty and participates in community outreach with the Sandals Foundation, Earth Guardians, and sits on the Welfare Committee for the resort team.”

For Kimony helping others is natural and necessary; “I grew up in a family and community of sharing and being each other’s keeper. I have received so much from others who have helped me along the way, and as you learn and grow it is important to give.”

On reflection of his journey and his advice to other creatives, Benjamin shared, “My advice may sound typical but it is true, never give up and believe in yourself, as anything is possible. You may not be able to see your door of opportunity right now, but sometimes it may simply appear.”

He continued, “Before joining Sandals I was a construction worker and young father with a passion for dance. Today l am an Entertainment Supervisor at one of the best resorts in the world, a father of two, and a man who is better equipped to handle life’s challenges. Looking back I really have come a long way and I am looking upward and onward to do even greater things for myself and my family.”