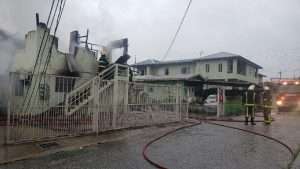 (TRINIDAD EXPRESS) – AN 89-year-old woman was found dead in Tunapuna yesterday morning after a fire at her home.

The deceased has been identified as Zubida Mohammed of Prescott Lane in Tunapuna.

Residents of the area told the Express that around 8.45 a.m. they heard a loud explosion, and then observed flames coming from one of the rooms of the bottom floor of the two-storey home.

The police and fire services were notified, and officers from the Tunapuna Police Station and the Wrightson Road fire headquarters responded.

In the interim, residents attempted to break into the home, as they did not know where Mohammed was.

A bucket brigade was even formed to contain the fire.

However, it was to no avail.

The fire quickly spread and consumed the two-storey building.

When fire officers arrived on the scene, they even called for assistance from officials from the Arima fire station, as at the time, officers from the Tunapuna fire station were said to be responding to other reports of distress as a result of flooding in the division.

However, Tunapuna fire officers were eventually diverted to the fire, and, with the aid of water trucks, they were able to contain the blaze.

In the bathroom of the ground floor of the home, fire officers found Mohammed’s body near a tub.

She was pronounced dead by a district medical officer, and officers from the Tunapuna fire station are said to be continuing enquiries.

Mohammed’s daughter was too distraught to speak with the Express when approached.

‘A stalwart of the community’

She said that her mother was expected to celebrate her 90th birthday in March, and she felt heartbroken to know that she died in the manner she did.

Mohammed’s neighbours, however, described the 89-year-old woman as a “loving and sweet” individual who was a stalwart of the community.

“She would always tell you good morning, whenever she saw you. And she always had a smile on her face. She may have been 89, but she liked to do everything for herself, as far as she could. This here, it’s a sad, sad thing that has happened. Especially when you consider how much rain is falling. That didn’t stop the fire at all. That flame spread like it had a life of its own, and it’s only when fire officers reach that they were able to get a proper handle on it. Initially, we were hoping that Miss Mohammed wasn’t home. Because we didn’t hear any screams or anything like that when the house catch fire. But when her daughter came up and no one knew where she was, that’s when we began to fear the worst. And the worst was realised. Since her daughter found out she’s just been crying, and I don’t blame her. Any loss of life is a terrible thing, but in conditions like this, it is especially heartbreaking,” the Express was told by a man who only gave his name as Patrick.

Fire officers observed that a gas-cylinder in the home appeared to have been damaged, and it is suspected that the fire may have been caused as a result of the leaking or broken cylinder.

However, investigators are expected to return to the scene today to continue their enquiries and determine what would have caused the fire.