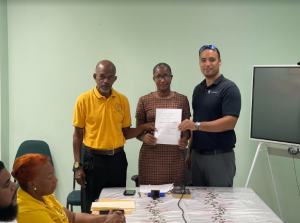 PR  – An addendum to the Industrial Agreement between the Commercial and  Industrial Workers’ Union and Steele’s Auto Supplies Co. Ltd. was signed on Friday, November 25,  2022, at the Ministry of Legal Affairs, Labour, and Consumer Affairs.

The Agreement came into force as of April 1, 2018, until March 31, 2021, and shall thereafter renew  itself from year to year subject to sixty (60) days’ notice in writing of intention to amend by either party.

Approximately fifty (50) workers are to benefit from salary increases of two percent (2%) every year for  the three (3) years of the addendum.

In addition to the salary increase, workers in the Vehicle Sales Department, the Spare Parts Division and the Automotive Art Department are to benefit from a commission of 1.5%, 1% and 1%, respectively, over the three (3) years of the addendum.