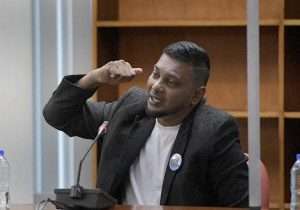 (TRINIDAD EXPRESS) – Lone diving survivor Christopher Boodram wept throughout his testimony at the commission of enquiry (CoE) yesterday as he expressed sorrow and guilt at failing to fulfil his promise of returning for his “brothers” in the pipeline.

Boodram sobbed on the witness stand on Day 2 of the hearing, his voice cracked and he continuously wiped away a stream of tears with a white hand towel as he detailed how he escaped the pipeline nightmare on February 25 this year.

Boodram broke down when he disclosed that at one point, he had to forcibly yank his foot away from the grip of Kazim Ali Jr, who pleaded with him not to leave them behind, even though it was understood that he (Boodram) had to make his way out in order to get help for the others.

Dressed in a black suit and seated in the witness box in the commission of enquiry room at Tower D, International Waterfront Complex, Port of Spain, Boodram painted a vivid image of the horror he and the divers endured after they were sucked into the 30-inch pipeline—their eyes and throat burning, limited air, broken and injured limbs, and engulfed by total darkness.

Boodram is the lone survivor.

During his testimony, Boodram emphasised that all his colleagues were alive in the pipe, and had there been rescue efforts, they would have all been alive today.

He expressed shock that after he crawled out of the pipeline into the habitat area (hyperbaric chamber), there was no sign of help.

“When I see that, I wasn’t even sure I was living still, it was so unbelievable that this happen and nobody inside the pipe trying to rescue we, nothing. Everything inside me was hoping that a rescue was going on (voice breaks)…nobody was making an attempt to rescue we, you know how that feels?”.

‘Let we get out of here’

In March his year, Boodram had exclusively shared his story, headlined “The day I cheated death”, with the Sunday Express.

At the enquiry yester­day, he recounted in detail everything that he had shared previous­ly about his survival with this newspaper, and which he also provi­ded via statement to the commission.

In response to questions from both CoE chairman Jerome Lynch KC and the commission’s attorney, Ramesh Lawrence Maharaj SC, Boodram outlined the job the crew had to perform—dive into the waters, enter the habitat and install a riser by taking out the blank, removing the bolts and deflating the plugs. He said they had to remove a flange as welding works were previously completed to the pipeline.

During that process, the five divers were sucked into the pipeline.

He said prior to entering the waters that day, the crew had a “tool box meeting” where they went through the job and safety briefings.

Boodram said the job required a team effort as the blank weighs about 150 pounds.

He said this was not the first time they had done this type of work and to his knowledge, there was no warning or concerns about a “Delta P” issue.

Boodram said the men had left the habitat, awaiting “carber testing” to be done, and during this time they had their lunch.

They then returned to the habitat after Ali Jr indicated they had received approval to continue the works without the carber testing being completed.

Boodram said all that was left to be done was to take out the inflatable plug, install the riser and their work would be done for that day.

He said he stood back and saw there were some issues with a lever being jammed, and Ali Jr passed a spanner to him to give to the crew for the operation.

“After I do that, I turn around and see the water in the chamber start to rise. I say, ‘Allyuh, what going on here, this thing filling up; let we get out of here,’” he said.

Boodram said in a split-second he felt like he was in a tornado, and he went into foetal position as he was hurled into the pipe at “unbelievable speed”.

He said he felt his lungs fighting for air, and “at that point I tell myself I was going and dead. I say, ‘God, I coming. Ma, look out for me.’ I was expecting to be dead in there. I was in a state of panic; I wasn’t sure if I was in hell or heaven”.

Boodram said he then heard voices and realised that he and his “brothers” were all in the pipeline.

He cried as he disclosed that he thought he was swept into the pipeline head first, and it was his colleagues who told him he was wrong and the way out was in the other direction.

He said had they not told him this, he would have not made it out of the pipe.

Boodram said Ali Jr was closest to him that he could feel his body. He said the four of them, except for Nagassar, formed a human chain-link and pushed and pulled each other through the pipe.

Henry, he said, was in immense pain as his foot was broken. He said they prayed together, and he kept assuring them that they would come out of this alive with God’s grace.

Boodram became inconsolable as he shared words from Ali Jr, saying they were going to die and for Boodram to not leave them.

Lynch advised that a 20-minute break be taken.

On his return, Boodram again grew emotion­al and paused at times, but kept repeating that he owed it to his brothers to be present and shared what happened.

He said he, Ali Jr, Kurban and Henry were on their backs with just about six inches above their nose to breathe as they slowly crawled through the pipes.

Boodram said as he was crawling out of the pipe, he found three oxy­gen tanks, one of which he and Ali Jr used to “buddy breathe”. Kur­ban, he said, had also found a tank which he used.

He said he then came to a part of the pipe which he had to dive into, and he made the decision to go in.

Boodram said when he looked at the distance, pace and difficulties the others were having to crawl through the pipe, he went back to them and told him that the only way they could survive was if he left them and sought help.

He apologised for being a big man who was crying as Lynch said there is no need for an apology and urged him to continue.

Boodram continued that the longer he stayed in the pipe, the more he realised the danger of breathing in that air and the rising liquid levels, and he too had injuries to his arm.

He said he had found Ali Jr’s GoPro camera and thought about lea­ving a message for his family, but he decided to not proclaim death on his life and trust in Jesus Christ to help him.

He said the four men pleaded with him to not leave them.

“Kazim tell me yeah (he could go) but he could not let go of my foot. I had to pull my foot off of Kazim, kind of kick it off him…I had to yank it out,” he said as he cried.

Boodram said he turned on his belly and pushed the oxygen tank in front of him and mustered up every bit of strength to move out.

“I ask God to give me the strength and I just gone, I start to move through that water,” he said.

He said his tank started to go dry and, fortunately, he reached an air pocket and he also found another tank.

He said as he moved, he heard “Fyzie” behind him urging him to wait, but he was focused on getting help and contin­ued.

He again promised to return and swam through what he said was about 30 to 40 feet of liquid and met a bend in the pipeline and another full tank of oxygen.

Boodram said he held onto the full tank and swam upwards and was shocked no one was there to rescue them.

He said he grabbed on to a piece of chain to try and pull himself upwards to the top of the pipe in vain. He said he started bawling, crying and knocking the pipe with the chain as his body weakened.

He then saw light and he grew afraid as he thought the angel of death had come for him.

‘Go and save your father’

Boodram said he knows Ronald Ramoutar as his mentor and neighbour, but he did not recognise him. He said Ramoutar tried to help him out but could not, and then Corey Crawford came in and helped rescue him.

He said he immedi­ately indicated to Ra­m­outar that “Fyzie” was right behind and help must be sent to rescue the four other divers. He said Ramoutar, Ali Jr’s brother-in-law, indica­ted they will be going in to rescue the others but were awaiting equipment.

Maharaj asked Boodram if anything was blocking the pipeline to prevent rescue efforts, and Boodram said there was not.

He said when he came out of the water, he saw Nicholas Kurban and shouted at him, “Nicholas, go and save your father, he not far down!” to which he replied, “Alright”.

He said he kept repeating for the others to go back, and even used profanities as he begged them to go back.

He said when he was taken to the San Fernando General hospital, all the staff there could attest to him constantly repeating that they must go back for his brothers.