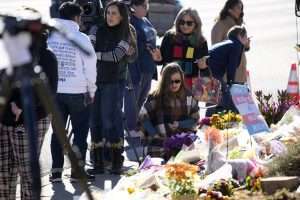 (AP) — The man suspected of opening fire at a gay nightclub in Colorado Springs was being held on murder and hate crimes charges Monday, two days after the attack that killed five people and wounded many others.

The charges were preliminary, and prosecutors had not filed them in court. The hate crime charges would require proving that the gunman was motivated by bias, such as against the victims’ actual or perceived sexual orientation or gender identity.

The attack was halted when a patron grabbed a handgun from Aldrich, hit him with it and pinned him down until police arrived minutes later.

Court documents laying out what led to Aldrich’s arrest have been sealed at the request of prosecutors, who said releasing details could jeopardize the investigation. Information on a lawyer for Aldrich was not immediately available.

A law enforcement official said the suspect used an AR-15-style semiautomatic weapon, but a handgun and additional ammunition magazines also were recovered. The official could not discuss details of the investigation publicly and spoke to The Associated Press on condition of anonymity.

Of the 25 injured at Club Q, some were hurt trying to flee, and it was unclear how many were shot, a police spokesperson said.

The club was one of two nightspots for the LGBTQ community in Colorado Springs, residents said. Authorities were called at 11:57 pm. Saturday with multiple reports of a shooting, and the first officer arrived at midnight.

Club Q is a gay and lesbian nightclub that features a drag show on Saturdays, according to its website. Club Q’s Facebook page said planned entertainment included a “punk and alternative show” preceding a birthday dance party, with a Sunday all-ages drag brunch.

Colorado Gov. Jared Polis, who became the first openly gay man to be elected a US governor in 2018, called the shooting “sickening.”

“My heart breaks for the family and friends of those lost, injured and traumatized,” Polis said.

The shooting came during Transgender Awareness Week and just at the start of Sunday’s Transgender Day of Remembrance, when events around the world are held to mourn and remember transgender people lost to violence.