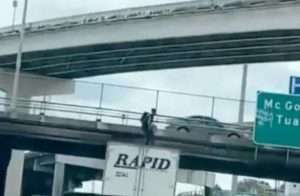 (JAMAICA OBSERVER) – A 25-year-old man from Houston, Texas died last week after falling from the top of an 18-wheeler trailer he was dancing on as it passed under a bridge.

According to a news report from Fox26 Houston, the police said the man was knocked off the top of the truck around 11:35 am last Thursday while dancing on it along the US-59 Eastex Freeway, unbeknownst to the driver.

The report said the man allegedly jumped or climbed onto the trailer and appeared to be filming himself while dancing. Footage of the incident was subsequently posted online.

The man apparently fell from the truck into oncoming traffic. He was taken to the hospital where he was pronounced dead.

According to Fox 26 Houston, police evaluated the truck driver after the incident. He was found to not be impaired and was released without charges.

“We haven’t had a case like this in quite some time,” Houston Police Department spokesperson Jodi Silva said.