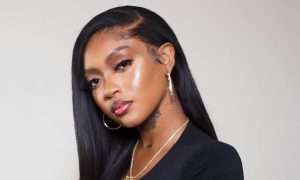 (URBAN ISLANDZ) – Jada Kingdom has revealed that she suffered a miscarriage at 15 weeks. On Tuesday, the artist shared a video showing two positive pregnancy tests along with several photos and videos of herself over the past month showing her at the early stage of pregnancy.

The artist’s revelation comes a week after she revealed that she was suffering from bipolar depression. Many fans have also observed that the artist was very emotional in the past few days. On Instagram, she also deleted all of her posts and replaced them with black squares.

Fans had speculated that Jada was pregnant after a video from her most recent performance weeks ago appeared to show her stomach growing. The artist was recently in Grenada with her stomach bared in several crop tops or exposing tops.

At the time, she had not acknowledged the rumors, only writing on Instagram Story, “Some things are better left in the dark. I won’t say much but just know… I’m Omw.”

Fans who saw the post also questioned whether she and Nas EBK had broken up as they were not seen together in recent photos, and she also deleted him from her social media account.

In an Instagram Live on Tuesday, the artist became emotional as she spoke about dealing with her emotions.

“Every time I’m going through my episodes or my mental breakdowns or whatever I just lock off the phone completely because it’s better that way,” the artist, who was teary-eyed, said in a video.

Neither Jada Kingdom nor Nas EBK confirmed whether she was pregnant or had a miscarriage. However, there are reports that Jada had broken up with Nas and had gone back to her boyfriend, Verse Simmons.

In the meantime, fans also shared sympathy for Jada, who has in the past revealed that she was raped twice- at the age of 14 and 16 when she had a marriage stemming from another rape.