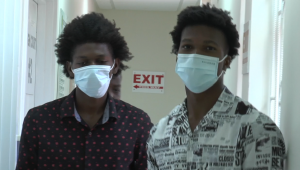 Raynell Coutain, 22 years old, Diver and Ronaldo George, 22 years old, Construction Worker both of Telescope, St. Andrew were arrested and charged for the offences of Robbery with Violence and Possession of a Firearm, in connection with November 8th Robbery in the south of the island.

An additional charged of escaping lawful custody were laid against Mr. Coutain and Mr. George.

Both men appeared at the St. George’s Magistrate’s Court today and were granted bail in the sum of $100,000.00 with two sureties. As part of their bail conditions, they are to surrender all travel documents, report to Grenville Police Station daily and have no contact with the witnesses.