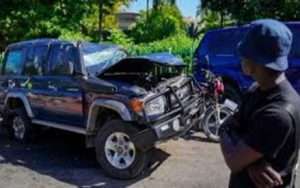 (CMC) – Haitian gunmen fired upon several vehicles belonging to the National Police of Haiti (PNH), the Embassy of the United States as well as commercial transport on Monday, but there were no reports of fatalities.

The US Embassy in a statement confirmed the attack, but said “no member of the staff of the Embassy was injured, nor of the police”.

The Embassy statement did not indicate the location of the attack or who the attackers were, but media reports here said that the convoy was targeted in the Croix-des-Bouquets area, at the northern entrance to the capital where the “400 Mawozo” gangs operate.

Criminal gangs operate and control or influence parts of the country that has been plagued with violence since the July 2021 assassination of President Jovenell Moise at his private residence overlooking the capital.

Last month, United Nations Secretary-General Antonio Guterres condemned what he called an “absolutely nightmarish situation” in Haiti with gangs blocking the movement of fuel and other materials in the Port-au-Prince harbour.

Guterres has urged the international community to consider deploying forces to the country to address growing humanitarian and security crises in the country.

While the gangs are now allowing the fuel to be distributed, kidnappings for ransom continue in the country, where opposition forces have been calling on Prime Minister Dr Ariel Henry to step down and call fresh elections.