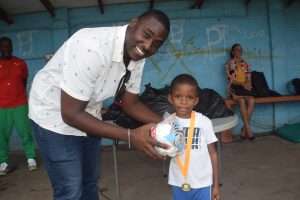 PR – Minister for Carriacou and Petite Martinique Affairs Hon. Tevin Andrews is playing his part in the development of football on the sister isles.

Minister Andrews donated footballs to some of the young football players who recently participated in the Inter-primary Football Competition and their coaches.

Hon. Andrews, who presented prizes and delivered brief remarks at the closing ceremony of the competition urged the young footballers to continue to excel in the sport which can lead to a fulfilling career.

The competition was won by Our Lady of The Rosary Catholic Primary School, formerly known as L’Esterre Rosary School.

The young footballers of L’Esterre, playing against Hillsborough Government School in the final, defeated their opponents two (2) goals to one (1).

Nioquan Roberts of Dover Government School was awarded the prize for the most goals in the competition. He scored twelve (12) goals.