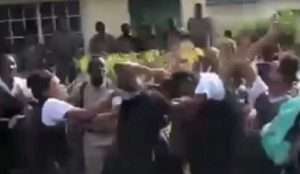 (JAMAICA OBSERVER) – Sixteen female students of Meadowbrook High have been suspended following a brawl at the school last Friday which was caught on video and widely circulated online.

The St Andrew-based school’s administrators made the revelation at a staff meeting on Thursday.

In a leaked recording of the meeting, the school’s vice principal, Lucien Reid, said investigations revealed that the fight was triggered by a love triangle.

“One of the key things that would have caused the conflict has to do with a relationship gone sour… a lot of what we saw on video originated from that, persons defending the love or lost love of another individual,” Reid said.

According to the school’s principal, Kevin Facey, the incident occurred last Friday between 2pm and 2:40pm, when four fights broke out among the feuding students. He said the fights were broken up by the limited staff on the compound at the time with the help of sixth formers and some parents.

The video of the incident shows a number of female students grabbing, kicking and punching one another as several boys are seen attempting to part the fights.

It is the latest in a worrying string of violent incidents at the nation’s schools.

Last month, a grade 11 student at Kingston Technical High, Michion Campbell, was stabbed to death by another female student at the school.

In June, a 16-year-old student at the Tivoli Gardens High School in Kingston was charged with assaulting a 56-year-old teacher at the institution

Earlier this year, a fight between two female students at Muschett High School in Trelawny left one of them nursing stab wounds to the face while the other girl was taken into police custody.