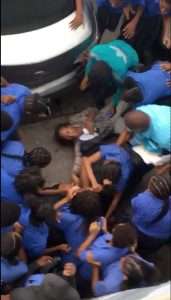 (TT GUARDIAN) – The Ministry of Education on Monday received a report into a fight at a secondary school in Port-of-Spain that has now gone viral on social media.

In a video posted to social media on Sunday, a crowd of over 20 students, reportedly from the Tranquillity Government Secondary School, is seen tussling with a couple students in an all-out brawl.

Three staff members, among them principal Ann Margaret Robinson, attempted to intervene but the students who were the main instigators did not immediately stop.

Robinson, the daughter of former President and Prime Minister Arthur NR Robinson, was thrown on the ground while trying to restore order and was seen getting help from her colleagues before the video clip abruptly ended.

The incident reportedly took place last Friday around 9. 30 am.

Education Minister Dr Nyan Gadsby-Dolly confirmed to Guardian Media yesterday that the students directly involved in the fracas had been suspended and will receive attention from the Student Support Services Division (SSSD).

However, depending on the disciplinary history of the students involved, the Minister said their parents will receive expulsion warning letters on their return to school or they may face expulsion at this time.

Dr Gadsby-Dolly said the principal’s report will also determine the exact nature of the discipline to be meted out to each student.

“The Ministry of Education will continue to offer support, counselling and guidance to all students who require it, but the safety of our teachers, administrators and students are being compromised by a minority of students, who continue, by their actions, to disrupt some schools and bring the education system into disrepute,” Gadsby-Dolly said.

She warned that the law allows for such students to be removed from the system “to restore an atmosphere of safety and security to the learning environment, and this option has been, and will continue to be exercised.”

“Our education system will not be held to ransom by students who, despite the best efforts of SSSD officers, continue to disrupt our schools,” Gadsby-Dolly noted.