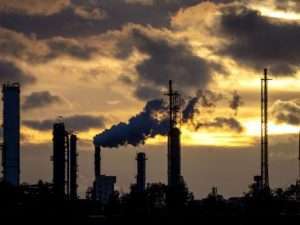 (AP) — The first full day of the year’s most important summit on climate change, known as COP27, got underway today with urgent calls by leaders to slash greenhouse gas emissions as the planet warms and severe weather events become more frequent and destructive.

Scores of presidents, along with thousands of diplomats, climate negotiators, business leaders, activists and journalists descended on the Red Sea resort city of Sharm El-Sheikh to take part in discussions and negotiations slated to go through November 18.

“Climate change will never stop without our intervention,” said Egyptian President Abdel Fattah el-Sissi, opening the day’s session. “Our time here is limited and we must use every second that we have.”

Former U.S. Vice-President Al Gore, one of the first leaders to raise the alarm about climate change, framed the question of whether to decarbonize as a “life over death” choice by leaders.

Nigeria’s Environment Minister Mohammed Abdullahi, along with many others, argued that the action needed to go beyond just cutting emissions in the future. Rich nations, most responsible for climate change, must help poor nations hit hard by impacts of climate change.

“The blame game should stop,” he said, adding that the country would be “aggressive” during negotiations about financing and reparations for vulnerable countries.

Here is a look some of the largest storylines on the first day of COP27:

In the world of climate negotiations, loss and damage refers to reparations. That would be rich nations, the most responsible for the emissions that have led to climate change, making reparations to developing countries that are often most impacted.

While the idea has long been around, traditionally it’s been more on the fringes of climate discussions than in the forefront. Today, it dominated many of the talks.

For the first time, developing nations got on to the summit agenda the issue of loss and damage, and numerous leaders brought it up and urged action. The setting of this year’s summit, Egypt, a developing nation in Africa, seemed to give the initiative a symbolic push.

“The damage is obvious,” Ghana’s President Nana Akufo-Addo told The Associated Press. “Those who are responsible should be very, very much aware of the need to compensate others.”

Throughout the speeches, leaders urged their counterparts and negotiators not to get distracted amid so many things competing for attention. There are the U.S. Midterm elections on Tuesday. Now in its eighth month, Russia’s invasion of Ukraine has pushed some countries to speed up plans to transition to green energies while others have come under criticism for turning back to dirty fuels like coal to make up the energy shortfall. And COP27 will still be happening when leaders of the world’s richest nations meet in Bali in Indonesia for the G20 summit next week.

On the sidelines, there was also talk about who wasn’t attending the summit, and what that might say about their commitments.

Leaders of two of the biggest emitting countries, China and India, thus far appear to be skipping the talks, though they are sending underlings to negotiations. The leader of the historically top polluting country, U.S. President Joe Biden, is coming days later than most of the other presidents and prime ministers on his way to Bali.

To coincide with the summit start, jailed opposition activist Alaa Abdel-Fattah escalated a hunger strike, refusing also water, according to his family. Today, Agnes Callamard, secretary general of Amnesty International, warned that failure by the Egyptian government to release him would lead to his death.

Abdel-Fattah, 40, has spent most of the past decade behind bars. For many Egyptians, his detention is a symbol of the country’s return to autocratic rule. For more than six months, Abdel-Fattah has been on a partial hunger strike, consuming only 100 calories a day.

Hoping to push the issue, Abdel-Fattah’s younger sister, Sanaa Seif, came to Sharm el-Sheikh early today. She arrived on a flight from London through the Turkish city of Istanbul.

“I’m here to do my best to try and shed light on my brother’s case and to save him,” Seif said upon arrival.

Since 2013, el-Sissi has overseen a massive crackdown, jailing thousands of Islamists, but also secular activists involved in the country’s 2011 uprising. Many other activists, journalists and academics have fled the country.

As expected, Saudi Arabia had a large presence, both inside the COP27 venues and outside.

The crown prince said the money would support initial projects and the budget for the Middle East Green Initiative, which Saudi Arabia launched a year ago. Saudi Arabia had a large pavilion outside the venue dedicated to its green initiatives.

Many climate change activists say the strategy and investments are simply a way for Saudi Arabia, one of the world’s largest oil producers, to continue with business as usual. They say the circular carbon strategy focuses on unreliable carbon capture and storage technologies rather than phasing out fossil fuels.