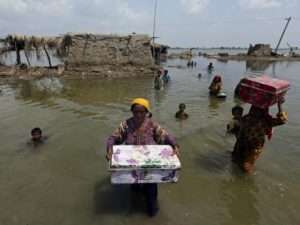 (AP) — Earth’s warming weather and rising seas are getting worse and doing so faster than before, the World Meteorological Organization warned Sunday in a sombre note as world leaders started gathering for international climate negotiations.

“The latest State of the Global Climate report is a chronicle of climate chaos,” United Nations Secretary-General Antonio Guterres said.

“We must answer the planet’s distress signal with action — ambitious, credible climate action.”

In its annual state of the climate report, the United Nations’ weather agency said that sea level rise in the past decade was double what it was in the 1990s and since January 2020 has jumped at a higher rate than that.

The last eight years have been the warmest on record, the WMO said in a report that didn’t break new ground but was a collection of recent weather trends, data and impacts in one central place.

“The melting (of ice) game we have lost and also the sea level rate,” WMO chief Petteri Taalas told The Associated Press.

“There are no positive indicators so far.”

The only reason that the globe hasn’t broken annual temperature records in the past few years is a rare three-year La Niña weather phenomenon, he said.

The data on sea level and average temperatures are nothing compared to how climate change has hit people in extreme weather.