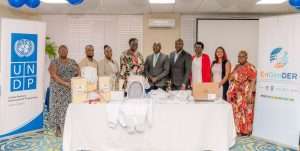 PR – The Government of Grenada is seeking to create a truly inclusive Grenada and has partnered with the United Nations Development Programme (UNDP) Barbados and the Eastern Caribbean to ensure access to opportunities for all, including persons living with disabilities. With the support of Canada and the UK, through the “Enabling Gender- Responsive Disaster Recovery, Climate and Environmental Resilience in the Caribbean (EnGenDER) Project”, women, youth and persons living with disabilities will now have access to training opportunities in the areas of apiculture, hydroponics and solar drying. The training is expected to enhance the employment prospects of these persons to earn incomes sustainably and independently.

A total of sixty-three (63) persons are currently benefitting from the initiative including 39 women and 24 men of which 37 are people living with disabilities and 31 are youth. This inclusive training was derived from the country’s Gender Responsive Budgeted (GRB) Sectoral Adaptation Strategy and Action Plan (SASAP) for the Disaster Management Sector. The Strategy seeks to enhance the livelihood resilience of people living with disabilities, women and youth in Grenada following the impact of natural hazard events or disasters, as was seen in 2004 and 2005 with the passage of Hurricanes Ivan and Emily in Grenada respectively, by providing them with new skill sets and employment options.

Speaking during the launch, of the Gender Responsive Climate and Disaster Risk Management Project for Persons Living with Disabilities (PWD) in Grenada, Her Excellency, Lilian Chatterjee, Canada’s High Commissioner to Barbados and the Eastern Caribbean, remarked that, “persons with disabilities are often doubly disadvantaged and marginalised and, in the Caribbean, only 10% of persons with disabilities are employed.”  In emphasising Canada’s commitment to reducing gender inequalities and vulnerabilities among the at-risk groups identified by the project she stated, “Canada is committed to supporting the rights of people living with disabilities through our interactions with countries, our advocacy work and through our multilateral assistance programming evident through projects such as EnGenDER. Which demonstrate and support countries like Grenada to invest in their ability to better prepare, respond and recover, this project will do just that.” The training is expected to enhance the livelihood resilience of these persons following natural hazards or disaster events.

Ms. Deborah Cudjoe, Political Officer with the British High Commission in Grenada, speaking at the launch event stated, “the UK Government is pleased that EnGenDER rightly acknowledges that adaptation actions should follow a country-driven, gender-responsive, participatory and fully transparent approach, taking into consideration vulnerable groups, communities and ecosystems, ensuring that we ‘leave no one behind’.  The activities undertaken will contribute to Grenada’s National Adaptation plans in an inclusive way”.

In-addition to the training support provided, Grenada’s Gender Responsive Climate and Disaster Risk Management Project for Persons Living with Disabilities (PWD) will also support the development of a National Disability Resource Centre and a National Disability Policy, in keeping with the Government’s commitment to build a more inclusive climate and disaster resilient Grenada for all.

Reinforcing UNDP’s commitment to inclusive development, Ms. Limya Eltayeb, Resident Representative, UNDP Barbados and the Eastern Caribbean, also speaking at the launch event stated, “Through the support provided by EnGenDER, UNDP is assisting the Government of Grenada in the development of its first ever, multipurpose facility which is dedicated to people living with disabilities.” The facility will also serve as a Centre for other purposes including youth training and development activities as well as disaster resilience interventions. Ms. Eltayeb explained that EnGenDER’s financing of gender responsive feasibility and environmental assessments were critical in unlocking the funding, available through institutions such as the Caribbean Development Bank, needed to support the construction of the National Disability Centre.

The Resident Representative also noted, that the EnGenDER project funding will be used to support the development of the country’s National Disability Policy. Remarking on the role UNDP is playing in supporting the Government of Grenada in meeting this policy objective. Ms. Eltayeb stated that “policy development initiatives at all levels need to address the specific needs and circumstances of persons living with disabilities as well as those of their families. The development of a National Disability Policy is critical to informing and guiding such development interventions as well as articulating the country’s national policy on people living with disabilities.”

Meanwhile the Minister with responsibility for Social Development and Gender Affairs, the honourable Senator Gloria Thomas, noted that the “government acknowledges that adaptive, gender-responsive, inclusive actions are critical to sustainable development outcomes in Grenada, Carriacou and Petite Martinique.” In signally the project’s relevance she further said, that “the implementation of the EnGenDER project is important for the Ministry as the deliverables would signal an improvement of the quality of life for vulnerable populations whom we serve. It will address the lack of consideration of Persons with Disabilities (PWDs) in Grenada’s policy and programmes. The Ministry has therefore identified targeted interventions that are a priority area of focus for Persons living with Disabilities as well as at-risk youth and women.”

In total, the Government of Grenada is receiving USD $300,000.00 in technical and financial support to advance the implementation of all these actions which are expected to improve the climate and disaster resilience of persons living with disabilities, women, and youth in Grenada. The project, which is country driven is directly linked to the targets outlined within the country’s National Gender Equality Policy and Action Plan (GEPAP), and UNDP, through EnGenDER with the support of Canada and the UK Government, is helping the Government of Grenada to achieve this goal.