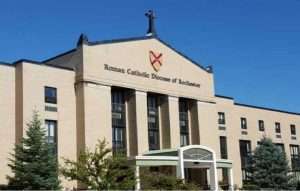 (AP) — The Roman Catholic Diocese of Rochester will pay $55 million to survivors of sexual abuse committed by clergy members under a settlement announced by church officials.

The diocese, which declared bankruptcy in 2019 after hundreds of lawsuits were filed against it under the state’s Child Victims Act, will create a trust for abuse survivors, Rochester Bishop Salvatore Matano said Thursday. Survivors may also be able to pursue further claims with the diocese’s insurers, Matano said.

The settlement was negotiated with abuse survivors and is subject to bankruptcy court approval.

Matano, whose diocese was the first in New York state to seek bankruptcy protection under the weight of abuse lawsuits, apologized to survivors in a “Letter to the Faithful.”

“The history of sexual abuse of children in our Church has caused tremendous pain, hardship, alienation, and understandable anger. It seriously has impacted survivors, their families, our priests and others in diocesan ministries who had no part in these egregious acts,” Matano said.

Church officials said they hope the settlement will enable the diocese to emerge from bankruptcy sometime in 2023.

Attorney Jeffrey Anderson, whose firm represents 175 of the claimants against the Rochester diocese, called the agreement “a pathway to a full measure of accountability.” He added, “This is a historic day with a historic deal.”

Mitchell Garabedian, who represents 96 of the claimants, said the settlement “allows many clergy sexual abuse victims to deservedly obtain validation, self-worth and a sense of accomplishment.”

More than 9,000 survivors of sexual abuse filed lawsuits against clergy members, teachers, Boy Scout leaders and others after New York state passed the Child Victims Act, which loosened the state’s statute of limitations for molestation cases and temporarily set aside the time limit for filing civil lawsuits.

The deadline for filing lawsuits was originally set for August 14, 2020, but it was extended to August 14, 2021 amid concerns that court disruptions caused by the coronavirus pandemic might have kept survivors from coming forward.