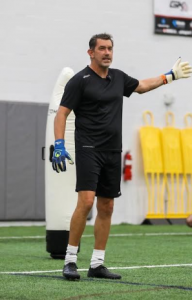 PR –  The Grenada Football Association (GFA) is providing the  opportunity for the nation’s goalkeepers and goalkeeper coaches to get training from premier  goalkeeper instructor, Phil Wheddon. Mr. Wheddon has been invited to conduct a number of  coaching sessions from November 11-15 in Grenada.

Wheddon brings a wealth of experience at the youth, collegiate, professional and international  levels to everything he does in goalkeeping and soccer. Since 2002, he has worked with U.S.  National Teams when he joined the women’s coaching staff as the goalkeeper coach. He helped  lead the team to a third-place finish in the 2003 FIFA Women’s World Cup and the gold medal at  the 2004 Athens Olympics.

In 2005, Phil became an assistant coach and goalkeeper coach with the U.S. Men’s National Team,  which won the 2005 CONCACAF Gold Cup and competed in the 2006 FIFA World Cup.

Phil is the only coach to serve on the staff of both the Men’s and Women’s National Teams and  attend FIFA World Cups with each team. The Premier goalkeeper coach has also trained some of  the best goalkeepers in the world, including Hope Solo, Brianna Scurry, Tim Howard and Kasey  Keller.

Phil Wheddon is currently the goalkeeper coach for the Major League Soccer Club Philadelphia  Union, whose goal keeper, Jamaica’s National Team Captain Andre Blake, won the 2022 Allstate  MLS Goalkeeper of the Year award, his 3rd title in this category. He is the first player in MLS history  to reach this achievement.

Wheddon’s Philadelphia Union will also contest the final of the 2022 MLS Cup in Los Angeles on  Saturday 5th November, 2022 from 4pm.

Mr.Wheddon’s itinerary is as follows:

Speaking of this opportunity, President of the GFA Marlon Glean says, “Phil Wheddon is a highly  respected coach with many titles under his belt. I am happy that our young goal keepers, national  goalkeepers and coaches will get to learn from the best as we continue our mandate to develop  football nationwide.”